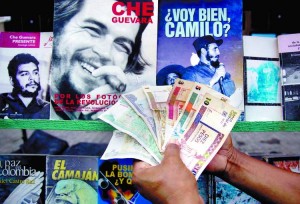 HAVANA, Cuba , December, www.cubanet.org – Monetary and exchange rate unification was addressed by Raúl Castro in his speech at the closing session of the National Assembly and by Vice President Marino Murillo Jorge, on December 21, according to the Cuban media. The interest of calming the population can be seen in the president’s assertion that there will be no affects on those who legally earn income in hard currency and in Cuban pesos, nor on the cash in hand of the population, or on deposits in the national banking system.

He also added that “it will not be a magic solution to our problems, but it will contribute decisively to improving the workings of the economy and the building of a prosperous and sustainable socialism, less egalitarian and more fair, which will ultimately benefit all Cubans.” It will begin with legal entities (agencies and state enterprises and cooperatives) and will continue with natural persons, but currently plans for its implementation are still be developed.

Meanwhile, Murilla said that in the coming two years the more technical and complex tasks of updating the economic model will be undertaken. He confirmed that the CUP (Cuban pesos) will be the only currency in the country and that in no case would there by any impact on people’s purchasing power, as the financial capacity of the CUC (convertible peso) will be respected.

He reiterated that the measure will not by itself resolve all problems, but that it should be undertaken within the “guidelines” (the adopted measures for updating the economic model), to continue promoting the development of the state socialist enterprise, unleashing the productive forces and creating an export mentality.

Undoubtedly, the tasks are immense, as it is almost impossible to achieve efficiency in a socialist enterprise. First there must be an effort to overcome all the characteristic deficiencies of the Cuban system, such as reliability in accounting and respect for contracts, eliminated in the 1960s as “capitalist malformations.” The value of work must be recovered, through conscious and creative participation of the workers, which is not resolved by the Labor Code adopted at the National Assembly session on 21 December.

Increases in production and productivity will be required in order to be able to adequately reward employees whose salaries don’t cover their basic needs and who feel no incentive to work hard and, therefore, to consider work as a social honor. The diversion of state resources as compensation for the poverty level wages or to increase one’s economic level — enrichment Cuban-style — must be eliminated; in short, the corruption generated by the system must be eradicated.

Unleashing productive forces is an imperative, but how? The straitjacket of central planning and socialist enterprises, the rejection of market forces, the restrictions on farmers and the self-employes, and other problems, prevent it. To day, the measures implemented under the adopted “guidelines” to update the system have not resulted in increases in the food supply, which in many components has declined. Manufacturing production is also falling and the private activities permitted do not complement the straitened macroeconomics of the country.

We can see that in developed countries and in those that have overcome poverty, small and medium enterprises (PYMES) carry important weight in the national economy. The vicious circle of scarcity of products for the national and international market, and the situation of nothing to export and the importing of what could be produced in Cuba, continues. An export mentality could be created, but will it happen? Will there be solutions in the “more technical and complex tasks” as predicted by the vice-president?