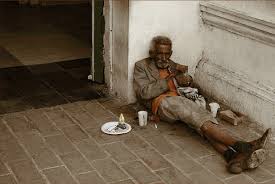 The newspaper Granma intended to have an impact with pompous editorial “Towards the 500 years of Santiago de Cuba” where it explains how that province has developed a project consisting of measures that will allow it to arrive at July 2015, the date commemorating 500 years since its founding, with the rehabilitation and total embellishment of its historic city center and significant sites.

Certainly, as it suits them, the Cuban authorities will disburse funds to restore important public works exposed to the eyes of foreign visitors. But I am slightly curious: what are they going to do with the beggars and mentally ill who wander around the city and leave much to be desired relative to social adornment, will they include them in the beautification? Hopefully they’ll hide them because then, as the song says… Who cares, I don’t give a damn.