SOMOS+, Germán M. González, 6 February 2020 — Reviewing the results of the tourism sector in the current year, we have the following outcome:

The arrival of visitors decreases, the official explanation is the restrictions the Trump Administration has put on Americans’ travel to Cuba, including stopping the cruise ships, but the truth is that destinations having little or nothing to do with the coercive measures of the US government are decreasing. Let’s look at this from January to October according to the National Bureau of Statistics and Information www.onei.cu: 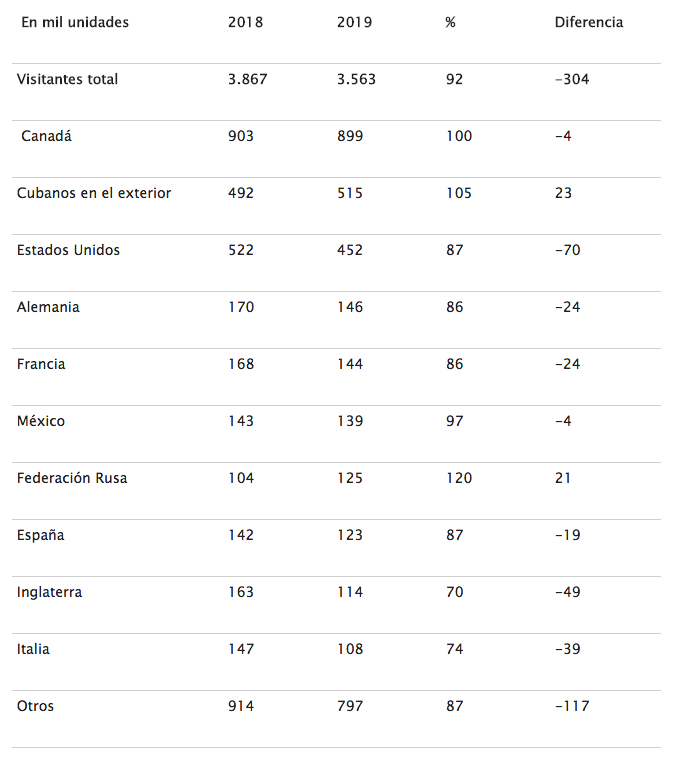 Only the visitors from the community (larger every day) and from Russia are increasing, representing 3.5% of the total and those from Europe and the rest of the world are decreasing by -280 thousand visitors, 210 thousand more than the decrease of those from the USA (-70 thousand). In this issue, as in others, if there were no “blockade” (embargo actually) it would necessary to invent it.

These trends continued in November and from January to September, we noticed that stays per visitor were only 4.4 days and revenues 503 CUC, in both cases, below the total of 2018.

The average occupancy rate is 38%, 1.7 percentage points below the percentage accomplished in 2018 and the most serious problem: since the early 2017 there is no occupancy over 60% in any month of the year.

In general, both absolute and relative levels in the indicators of the rates in 2019, are lower not only than 2018 but also in 2017; that is to say that the alleged locomotive of the Cuban economy has been in recession for two years.

According to the Cuban News Agency (ACN, for its acronym in Spanish), the first Deputy Minister of Tourism (now Minister), Juan Carlos García, reported in the recently concluded session of the National Assembly of the People’s Power that there are 11,000 empty rooms due to “insufficient preventive maintenance, lack of priority to prevention, solution and control fulfillment of the designed plans.”

In general, he acknowledged important breaches in maintenance and remodeling issues and listed a series of deficiencies, such as a deficit of suitable investors, technical documentation and equipment completion; insufficient preparation of the construction works; changes in the original projects; failure to fulfill the executive schedules: deficit in the supplies of the national industry; failure to accomplish the import plan; lack of skilled labor force, fuel shortage.

There were also problems in the operation of the elevators in the hotels that were not a cause for shutting rooms down, but impacted the service quality.

The performance of the other sectors must have been really poor for the minister Manuel Marrero Cruz to be designated as Prime Minister! Or is it that they took into account — as it usually happens in the system copied from the Soviet Union — considerations outside the efficiency and effectiveness in management.

This promotion recalls those made in favor of Inés María Chapman and Roberto Morales Ojeda, both with lower results than the usual inefficiency. Or worse, J.R. Balaguer’s promotion from Health Minister to Secretary of International Relations of the Party when the death of over twenty patients of Mazorra Psychiatric Hospital (from cold and starvation) resulted into prison sentences for staff of that hospital.

And how is it possible to justify that the investment program for 2019 foretold a hotel capacity growth of more than 3,800 rooms and the restoration of another 5,000? Why, considering the 38% occupancy rate that only exceeds 50% during one month of the year?