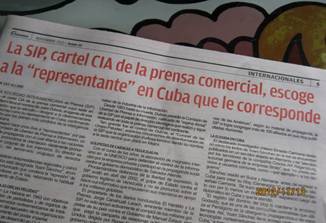 The yellow French-Canadian hack, living in Cuba, who often enjoys ample space in the official press to publish his diatribes, usually dedicated to writing against the Cuban mafia in Miami and against all those who think differently from the official politics, expanded his catalog and undertook to write against Yoani Sanchez.

In his characteristic offensive and unethical style, something he would not be allowed in Canada but which here, based on his official immunity, he practices, lacking all respect, he applies derogatory epithets and, without even taking into consideration that he’s talking about a woman, shows off all his baseness. It’s terrible to allow a foreigner to offend a Cuban citizen, without anyone overruling him, but here, where politics takes primacy over humanity, these things happen.

I’m not convinced of anything he accuses Yoani of because he provides no evidence, it’s all media speculations, but I know who he works for and who he is paid by. Becoming a hack from this dirty page, he has far exceeded his local prospects, perhaps due to this archaic national complex that whatever comes from the outside is valued more.

I do not buy anything that accuses Yoani because provides no evidence, as are their media speculations, but I know for whom he works and who is paid. Become a dirty hack page, has far exceeded the prospects of the court, perhaps because of this archaic national complex that what comes out is valued more.

In this case, what comes from the outside, is simply bogus.

Translator’s note: The article referred to accuses Yoani, as usual, of being a paid mercenary of the empire (the USA) and being a traitor to her own country. The article was briefly available on Granma’s English language site but seems to have been taken down.