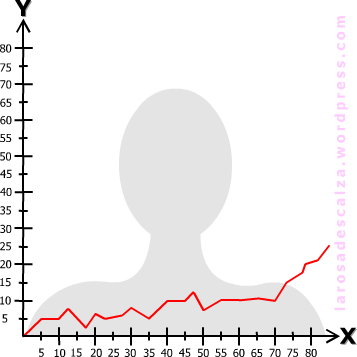 A little while ago I left my house and a neighbor in my sector (whom I shall call ‘X’) signaled me to come to the sidewalk in front. The attitude of her corporeal whisper intrigued me. I crossed the street to go meet her, looking all around, because her conspiratorial gestures put me on alert. There were only a few kids playing football in the street, and on the corner, a mysterious man with short hair was walking in small circles. Nevertheless I calmly approached her and her expression changed to one of admiration when I reached her: “Mi’ja, you didn’t tell me you have a blog!” ‘X’ only knows how to send and receive mail on “the appliance” which for her is the computer, as her youngest child (Y) showed her how before emigrating. So she regularly goes to an internet cafe to exchange messages with her offspring. In ‘Y’s’ most recent email, she commented that she’d found my journal via Google, that she subscribed to it and reads my works. She also sent X the link so she could visit me.

After a few minutes of talking, in which her flattery rose up into my face, I humbly thanked her and told her I’d write about this. She reacted with fear and the insistence of someone verbally begging on her knees and made me promise her I would not do it. She would not even agree to the option of changing the names, as she is in the phase of “behaving better than ever” to avoid problems and be able to reunite with her family in the United States.

During our farewell I turned my face and saw that coming towards us was the man on the corner who I was suspicious of, with a woman who appeared to be his wife and who carried a large purse. As they passed close to us, she told him–looking back secretively–that she was late because she had to walk about to avoid the police, and she feared they would confiscate the merchandise. ‘X’ and I looked at each other–with the indifference that tedious and repeated stories awaken–opened our eyes and with a sarcastic and silent smile we said goodbye that day.

I’ve come across her two or three times more, and after assuring herself that no one is observing her, she greets me with affection and she gives me the thumbs-up sign, the “V” of victory, or the “L” of liberty. I saw her again last night and she had an expression of repugnance. She greeted me coldly–like some revolutionary CDR* spy who knows my dissident activities–went toward the group that was gathering a few meters from us, where the CDR president’s house is and in front of which they were going to celebrate the National Assembly of the People’s Power.

The repressive agencies of the regime have implanted over decades, in regard to political matters, an osteomiedosis–a “fear in the bones”–that has penetrated deep into Cuban sociogenetics, generating frustration and forcing habitual pretense as a survival strategy. Regardless of everything I am an optimist, so I am sure that those problems that now seem hopeless will not be permanent in our society.

*Translator’s note: CDR stands for Committee for the Defense of the Revolution. These neighborhood-by-neighborhood and even block-by-block watchdog groups are one of the key mechanisms through which the state controls every individual.