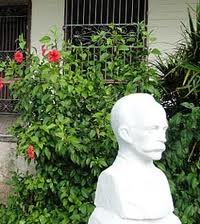 Rodney is a mischievous and happy child who is a little confused, because since he became a pioneer in October he does not fully understand the slogan “We will be like Che!” It is true that he has incorporated it like the rest of his classmates and repeats it as if he had a sensor that operates at certain stimulus. His parents and grandmother say that Che is the black spot appears on T-shirts, posters and on national television; that it is the poster of a photo that made him famous. they tell him he is also a martyr, but what does a child of six years understand about a champion? How many times will they have to repeat that the neck-scarf is not a rag for him to use to wipe his snot?

Last week, the school principal summoned his parents, because an extremist teacher ‘saw him’ stick gum on the bust of Marti that is in the patio. It really wasn’t her, it was another student who discovered the rubbery polymer in his hand and told her about it, but it is for her to “take on the case” because she is an educator and knows that the father of the student speaks ill of the government loudly.

As if it were a profanation, she was the highest authority with the information and so obliged to proceed, and she threw out the grave threat of “elevating it” to a higher level. So the parents came to the school and the director raised the issue with repeated interventions, and threatened to go to the police specializing in juvenile matters, and this mention set off the dissident father who ended the meeting.

This all set off such a commotion that Raul Fidel, the boy who really put the gum on the apostle’s face, arrived home terrorized and told his parents and grandparents, who know that an insignificant childish prank will not define the adult.

He told them that at the end of recess, he was fixing the velcro on this shoes and that he raced back to the classroom, spitting the gum out into the wind. His father and paternal grandparents have a long record in the Revolutionary Armed Forces (FAR) and the Ministry of Internal Affairs (MVD) — the father entered the Camilitos (the Camilo Cienfuegos Military School) when he finished sixth grade — and all hold high military rank.

So they put on their uniforms, hung all their badges and medals on them, and set off for the school. They were gang under the direction of the leader and they called the teacher on the carpet who apologized and praised “our glorious combatants of the FAR and the Interior Ministry.”

The surprise in her face, the gesturing excuses, the throwing aside of educational culture, anything not to look for trouble or a stain on her work record. That was the burial of an “ethics education” that saved Rodney from being wrongly accused because his father expresses himself freely in a country where we walk morally herniated due to the shackles of slavish thinking and the weight of words.