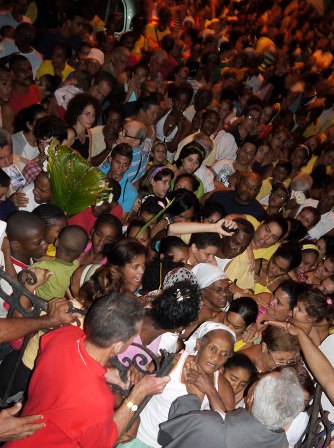 On Thursday a note from the editor of “Palabra Nueva” — New Word — the magazine of the Catholic Church, appeared in the official organ of the Communist Party of Cuba, the newspaper Granma. Where the presence of thirteen people in the temple of Charity was described as an “invasion.” The Catholic Church has always sinned in preferring the cushions of power to the mission to bring salvation to those who suffer, those who hunger and thirst for justice.

The early Christians were persecuted by the religious and political authorities of the Roman Empire. It was not political subversion which encouraged those small groups of people. It was a strange new faith that could overcome death and fill life with a new light, the light of love and likeness in a space called Christ.

When Paul says in Christ, I think he is talking about a dimension. And that dimension, that Word, had lived among us, and had died, killed in the worst way, and risen for us. Later the Church was no longer persecuted and was turned into a policeman.

When it confused his kingdom with the secular power, it became political. After centuries of shadows and lights, it retired to the Vatican, the Roman confession, and from there it dedicates every day to offering the sacrifice of Christ for the forgiveness and the resurrection of all. 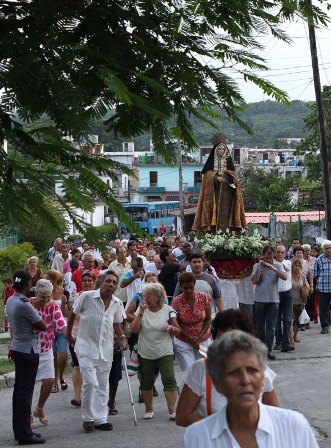 But it happens that in Cuba there are many victims, and even in the apostolic letters it is said that faith without works is a dead thing. I do not ask the Catholic Church to take part for a political party, which in fact is what is doing in Cuba. I ask, as a believer, as did Pope John Paul II, that it take the part of Christ in all, for freedom.

After we recover our rights as the people we are, to the secular power, there will inevitably be political openness because that, too, is a human dimension, and that’s why the government of Cuba would prefer that believers retreat to the temples and that they not be recognized in this hungry, castigated people.

If the Church is in the breaking of bread, the Eucharistic prayer, between those who can still go to Church and it doesn’t think of the hungry, the persecuted, it will not be preserving, guarding, the spiritual power and the mission it has in the world, to identify itself with the same people crushed by the powers of this world as does our eternal King and Priest over the secular power, when in the mystery of the cross the call to conversion is for everyone.

It will be standing on the side of power and lacking the faith of Christ’s sacrifice on the cross, completely transgressive, and out of love of the powerless. This is not a politician, this is a Christian.

Being Christian is not a part of our humanity, the fullness of the human person rooted in God, all deeply planted is in surface of the Deep, in the Trinity that is known by Christ and is kept in the intimate heart of the soul yielding fruit.

Ah, that after advocating for the dignity of the human person and his rights it is entered resolutely on the ground of their political rights, is a fact, but he in this he who has fear will be absent from men and from God.

That is why tyrants have limited the field of action of the Church, to what it seems, to prevent it from bringing freedom to Cubans. But when the Church is lending its prestige to power it is not realizing its mission above politics.

The editor of Palabra Nueva wrote a shameful note, because people do not invade the temples. We are asking for help. We do not need to be pure nor holy because only one is perfect and is the gateway for all. It is not about asking permission of the political and military government in Cuba, to fulfill the Christian mission of giving notice to the Cuban people of how much we can still be. If we had faith like a grain of mustard seed…