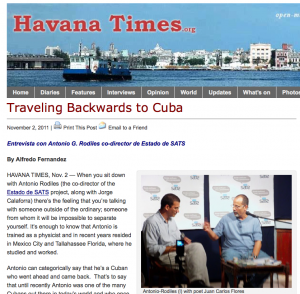 This interview with Antonio G. Rodiles in Havana Times, explains the Estado de Sats project in English, including the meaning of the name.  To add one more element to that: the word “sats” is Norwegian and means “velocity.”

In Antonio’s words from the interview:

Antonio Rodiles: The Estado de SATS name stems from an idea by actress Esther Cardoso, whom Jorge Calaforra, Evelyn Quesada and I went to visit when looking to see if she could provide us space at her Casa Gaia, where we held out first event in July 2010.

We were thinking about a name for the project, and I since I’m a physicist I was leaning toward something that had to do with resonance, something that accumulates that state in which everything begins to look and think in a similar direction.

Then Esther told us about “Estado de SATS” [state of sats], a term used to describe the theater prior to the time when the actor appears on stage.  It’s the moment when all energy is concentrated to explode on stage… finally realizing what has been prepared for a long time.