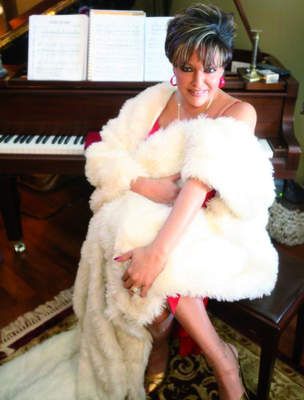 I had already read in a newspaper article by a fellow from the interior of Cuba that the salsa singer and musician Isaac Delgado, “the cool salsa guy”, had visited our country and offered his music, along with Silvio Rodríguez, in Santo Suárez neighborhood. The incident, although silently mentioned in the national media, has aroused suspicions among the Cubans that found out about it; but there is — and it looks like there will be — more. On the night of April 6th I was waiting for a delayed projection of a film, but since the TV programming was as bad as usual, I started anxiously switching between the six channels “mounted” (“hooked”) to the remote control and stopped at channel 6 (Cubavisión) surprised by the image before my eyes; it was the presence of Malena Burke’s, who was performing at the “Boleros de Oro” (Golden Boleros) Festival, which this time was dedicated to her mother, the late singer Elena Burke, better known as “the sentiment Lady”.

What I could see from her performance, I liked, and I wished I had seen the show from the beginning, given that it had been almost three decades since I last enjoyed one of this “cat’s daughter’s” performance who left this place but not Cuba. However, I still remember the historic diatribes put forward by the authorities and their spokesmen against Cubans who left the country. Since when had recent visitors stopped being stateless? Of course, any attempt to relax relations, mend fences, respect differences, and cut down the distances is something positive and I approve; especially if they are people born from the same womb of the fatherland. But, when will they allow the rest of Cuban artists and all the other immigrants in general who wish to do so to travel freely to our common homeland?

If the presence of this Cuban artist was a surprise for me, the implicit government’s coercion — that seeks to influence the behavior of Cuban immigrants — was not. The new immigration law took effect on January 14th for all Cubans on the archipelago but not for those who reside abroad. Why? What is justified as a selection, it is simply an unjustifiable discrimination and violation. In short, many suspect that the law is not an act of justice to the Cuban society, but rather it is oriented to help wash the dictatorial face of the authorities, who have set out to “charm” the US administration in order to normalize the relations with Cuba.

The formula that the government has used on the migrants does not come as a surprise to anyone, the one that does not allow them to travel to Cuba if they become involved in politics, with the exception of a few. As long as the “masters of the key of our homeland” don’t start from a place of respect for the diversity of opinions, it will be difficult to slide open the bolts to the gates of the national home to all Cubans.