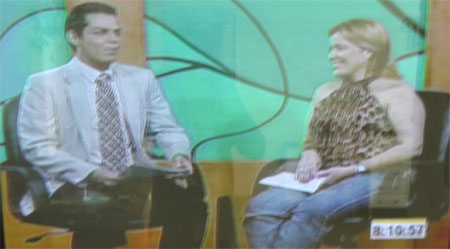 Early in the morning the program “Good Morning” featured a segment called “Good Sense” dedicated to the topic of how Cubans behave in public places. Sports facilities, lines, buses and others.

There were man-on-the-street interviews and phone calls. They talked about public insults to referees and athletes, what happens at concerts at La Tropical where things may end with machetes, they mentioned family violence as well as in schools where children are often the victims. The “celebrity” guest was a psychologist who explained the different kinds of violence, including physical, where she enumerated insults, threats and intimidation.

After listening to the usual opinions about how education should be shared between the school and the family, and some on-street interviews, I found stunning the absence of any discussion of a transcendentally important issue when talking about violent and aggressive behavior by Cubans in public: that is, the repudiation rallies.

How can the official media criticize a behavior that is promoted by government institutions without making any reference to this obvious contradiction?

Fool that I am, I turned to the telephone numbers displayed on the screen to solicit audience opinions. I had the good fortune to be dealt with by the program director (or by a woman’s voice who identified herself as such). Trying not to fall into what I was criticizing and as moderately as I was capable of, I snapped at the poor woman my concerns. She thanked me for my participation in the segment and I, fool that I am, continued to stare at the screen until the final goodbyes, without hearing any mention of my opinion.

I already said I was a fool, don’t remind me again, but even if I’d tried I couldn’t have written this post without some commentator criticizing me for having kept my opinions to myself.

In the end, I’m left with this question: Isn’t it a demonstration of violence to use the power of the editors to annul my humble participation?