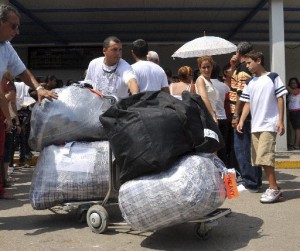 Eliseo, 39, is considered a public benefactor. A guy who is always welcome. For a decade, this Cuban American has been a ‘mule’. He resides in Miami and makes some fifteen trips to the island every year. Sometimes more. Right now, from his mobile phone, he calls his usual driver to pick him up at the entrance to the Jose Marti International Airport, south of Havana. He loads a bunch of bags and briefcases. He will be in Havana for one day. His mission is to unload the 150 pounds of food, medicine, electronics, clothing, shoes and toys, among other things, in a house that he trusts, where later they will take charge of delivering them to their destinations.

Eliseo has set up a small business operating at full throttle, especially in the month of December. He charges $5 per pound of food or medicines, and $10 per pound of other items. To move certain goods controlled in Cuba, he discretely slips a hundred-dollar bill in the pockets of the customs authorities. In Miami he also greases the palms of air terminal officials. When George W. Bush turned the screws on the embargo against Castro, Eliseo always wrangled it to bring products and sums of money that violated U.S. laws.

“Now with Obama everything is easier.” The current occupant of the White House has taken steps to facilitate family relationships. Since December 20, you can send up to 10 thousand dollars via Western Union. On top of that, residents of the island can collect it in convertible pesos. Facing the urgent need of the “imperialist enemy’s” greenback, the Cuban government eliminated the 10% duty on the dollar.

On October 25, 2004, an angered Fidel Castro, supposedly caught laundering 3.9 billion old dollars in the Swiss UBS bank — something prohibited by the embargo — he announced a 10% tax on the dollar during a television appearance. Starting on November 8 of that year, the only currency that circulated in Cuba was the Cuban Convertible Peso (CUC).

Remittances from family members and the sending of goods by “mules,” in large part brace up the fragile and inefficient island economy. According to international organizations, through remittances alone the government allows some billions of dollars to enter the country every year. Darío, a 52-year-old economist, thinks it could be double that. “There is a lot of money that isn’t accounted for. It’s a source that permits the investment of money free of the State’s nets. The government knows it and won’t lose sight of it. It’s probable that in months to come they’ll stimulate it even more.”

In Miami, dozens of agencies are dedicated to the shipment of packages and money to Cuba. Meanwhile, Cubans on the island ceaselessly ask their relatives for things from disposable toilet wipes and tennis shoes to laptops and plasma televisions. If the embargo were to end, the interchange of merchandise and capital could exceed 5 billion dollars annually. And if the Havana regime would repeal absurd laws that prevent Cuban-Americans from investing in the country of their birth, the numbers could triple.

What’s certain is that the embargo hasn’t prevented families on the island from receiving money, by one means or another. Neither foodstuffs, medicines, nor other articles. Eliseo assures us that he earns almost 2,000 dollars in profit each month. “If it’s the end of the year, a little more. In whatever way, despite the fact that I live off of this ‘business’, it satisfies me to see the people’s joy when they receive their packages, or while you count out a bundle of bills for them.

But above all what sticks with me are the hopeful faces of children when you see them unpack toys and sweets.” Moments like those make Eliseo feel like a tropical version of Santa Claus. The families on both shores appreciate him.

Translated by Rick Schwag with a little help from JT