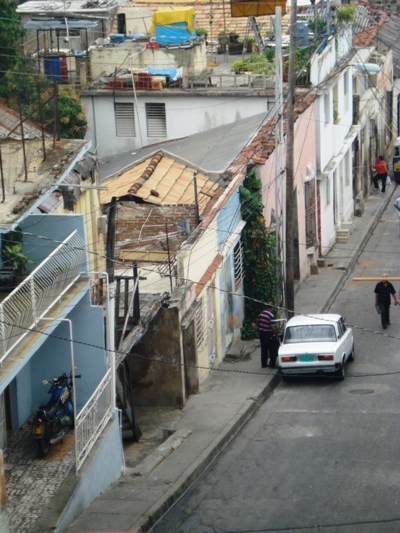 I couldn’t help going to visit Idalmis Nuñez Reinosa’s house when I heard that after being hit and kicked by the police in Placetas on Saturday the 3rd, she was “repatriated” by the same police force to her home town, Santiago de Cuba, I found her covered with bruises and scratches on her skin and with sore muscles that barely let her sit down. I could see for myself that the “police men” taught her.

Later on I decided to visit Anderlay Guerra Blanco in Guantanamo and finish a conversation with him that we had left hanging. I was there until Wednesday the 7th, when I decided to return my town. I left in the early morning, at 4 am, and logically I had to walk the streets of the city to get to the bus station, the only place where, at this hour, I could find a ride to another place.

I didn’t make the trip alone. Rolando Rodríguez Lobaina was with me and we tried to travel together through the inevitable streets of the town. We were detained by the police who put us in a patrol car and took us to the People’s Revolutionary Police (PNR) station known as Park 24.

Investigation. Police control. Researching our identity. We were there two hours. Long enough to know the Guantanamera night and early morning in a military joint. Two officers from the G-2 or State Security as the political police are called in our country even came, as they didn’t have authorization to let us leave. It became clear to us that if we couldn’t explain our presence on the streets we could be accused of spending the night in dark places and at an hour which, according to them, was dangerous. Along with us, more than six citizens had been detained, all young. According to what they told us the police picked them up in a park because they were talking and drinking alcohol and this turned them into people likely to commit crimes and the cops wanted, this time, to warn them.

It is a repressive system that operates in the nights and early morning in several villages in my country, some acquaintances told me. At least I was a witness while walking, before the break of dawn, through streets that are dark because in my country there are no street lights.