14ymedio (with information from agencies), Lima/Miami, 13 April 2018 — As they had warned days ago that they would, representatives of the Cuban government tried yesterday to prevent a meeting between representatives of other governments of the Americas and members of civil society from many nations. The meeting, held in the framework of the activities of the Summit of the Americas in Lima, was preceded by a monumental uproar in which Cuban pro-government activists, joined by a dozen Venezuelans, shouted “mercenaries” and “get them out” at the opponents of their governments. To the denunciations calling the event an “antidemocratic format” the pro-government group joined their voices in singing the Cuban anthem.

The protest over the presence of government opponents began when Luis Almagro, secretary general of the Organization of American States (OAS), took the floor to start the meeting.

“I have no problem talking to background music, as I did, and worse things have been done in my life to try to silence me,” Almagro told EFE during a pause.

“I think we all have to learn from this, there are countries that still have strategies that are at odds with democracy,” he added, describing “the spectacle that is taking place” as “regrettable” and “embarrassing.”

Almagro also told EFE that he has expected the protest to take place: “We had been told before we arrived that 40 gorillas had installed themselves in the front rows and had a disruptive intention.”

Cuba’s ambassador in Austria, Juan Antonio Fernández, said that he did not intend to “dialogue with mercenaries and terrorists and with that whole party that has arrived from Miami. Cuba’s civil society is the one that is expressing itself here,” Fernandez said in reference the pro-government protestors.

The US ambassador to the OAS, Carlos Trujillo, said he was “pleased that Cuban society has the opportunity to participate in a true democracy,” that is the one in Peru, and that representatives of the ruling party had “absolutely no respect… I respectfully ask these organizations to leave the room,” he added.

The representative of the Government of Mexico tried to mediate and asked everyone to listen, something that the Bolivian representative supported, although he mentioned the absence of Venezuela at the Summit. “You have to listen to all voices, but a voice is missing here,” he said.

The events occurred at the same time that the acting Secretary of State of the United States, John Sullivan, met with a small group of Cuban and Venezuelan opponents. At the meeting, the diplomat expressed his disagreement with the “undemocratic transition” that will take place next week in Cuba, when President Raul Castro leaves office.

Among those attending the meetings were Guillermo Fariñas and Antonio Rodiles, as well as Danilo Maldonado, the artist known as El Sexto. 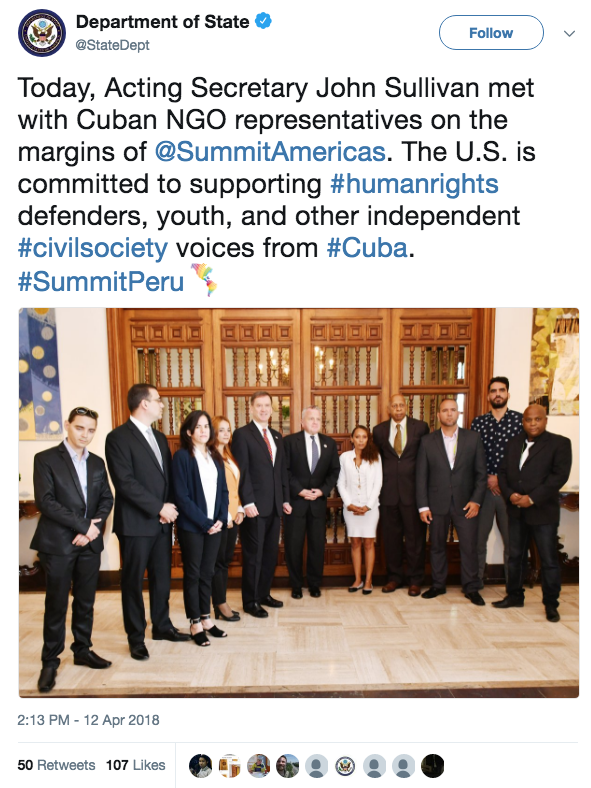 “The Acting Secretary of State applauded the work done by these independent activists and thinkers to promote a more open, free and prosperous future for their country,” and expressed his “support for the Cuban people in the face of the continued repression of their government,” said the US State Department spokesperson, Heather Nauert.

The acting secretary “condemned the harassment and intimidation” that “activists routinely face” at the meeting, and that the non-government activists denounced that some of their “friends and colleagues” could not travel to Lima because “the Cuban government prevented it,” Nauert added.

In this context, the Inter-American Press Association (IAPA) noted that the governments of the Americas have the “historic obligation” to take measures that lead to “a rapid and unwavering democratic transition” in Cuba and Venezuela.

IAPA, based in Miami, stressed that in both countries “the essential principles of the Inter-American Democratic Charter” are not respected, and said that the Charter “can not remain as a decorative statement, but should be a call to action.”

The IAPA noted that at the Panama Summit in 2015 it had stated that “the governments of the Americas had ‘a historic opportunity’ to reaffirm to both totalitarian regimes that they should show respect for those essential freedoms.”

“Today we believe that they already have ‘a historical obligation’ to take concrete measures that, described in that Charter, lead to a rapid and unwavering democratic transition,” the proclamation adds.

The Association, dedicated to freedom of the press, acknowledged that in recent years the international community has been aware of the “deteriorated socio-political climate in Venezuela and that many nations have refused to recognized Venezuela’s Constituent Assembly or to recognize any leader that emerges from fraudulent elections.”

Therefore, the IAPA urges that this consensus be used to “promote more drastic measures to prevent the regime from trying to perpetuate itself in power while turning its back on the progress of its citizens.”

Although no government in the region is exempt from occurrences of abuse, corruption and censorship, those with “democratic systems with separation of powers, independent judges, transparency mechanisms and a free press, have the necessary counterweights,” the Association added.

“The authoritarian regimes of Cuba and Venezuela are the antithesis of these values,” says the IAPA, which believes that the Lima Summit’s agenda, “Democratic governance against corruption,” will allow presidents and heads of state to feel an obligation to work for the citizens of Venezuela and Cuba.