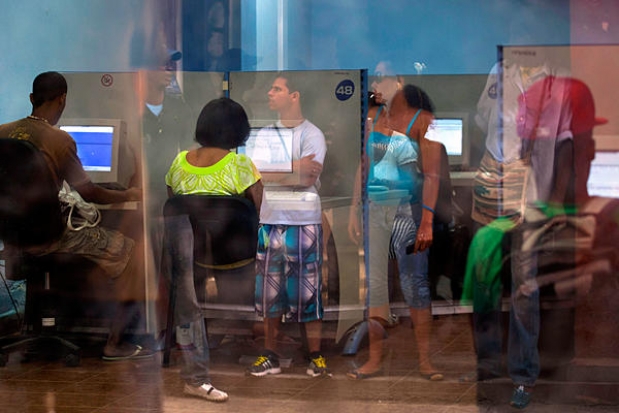 A couple days ago two neighbors were talking outside my house about the notice published in the newspaper Granma, official organ of the Communist Party. I don’t know what the news was, but one said to the other, “It came out in Granma, I read it,” as proof of veracity. The other responded, “I don’t believe what Granma says, I read the internet.”

A year ago it would have been difficult to hear a conversation like this between neighbors, I don’t think anyone would have talked out loud about the question of the credibility of the official national press. Nor do I know if my neighbor could connect to the internet a year ago, or just a few months ago, and by what route if he was able to do so.

Many Cubans connected before network access became widely available in a legal form for nationals. How? Some from their workplaces, legally and free, had access to the pages that the Government allowed. Others accessed from embassies, which is perfectly legal, but frowned upon by our authorities: many did not use this route for fear of stigma, for example that anyone could reproach them on seeing them enter the United States Interest Section.

Other compatriots accessed the internet «under the table.» Someone whispered to you «so and so has internet, but you can’t tell, it’s under the table.» Not the least bit strange in a country where illegality appears to be a prerequisite for things achieving the desired legal status. For example, people sold their homes and cars before it was legal to do so, not surprising in a country where you can go to jail for an illegality one day before it ceases to be one. This happened with holding currencies: one day made the difference between an “integrated and compliant citizen under the law” and a “criminal”; the next day the same difference was between “someone dying of hunger” and “a privileged citizen.”

Because in the end, it’s all about money. It’s money that makes the difference. We don’t want to have the right to enter the hotels in our own country, to travel, to buy a house or a car, unless we are high performance athletes and important cultural figures? Then there are our rights, let them. What’s stopping us? Money.

The Government seems to be so aware that we do not have money, that, according to the vox populi (which almost always is right), when a Cuban citizen living in Cuba has stayed at hotels with a regularity outside what is considered normal, their names are noted in a list and the government then comes around to ask how they can afford it. But this may be a rumor. Many good and bad things are attributed to our Government. Not all are true (bad or good).

The truth is that money now not only divides us into Cubans can stay in a hotel and those who can’t even dream of it; between Cubans who can dine at restaurants like Doña Eutimia, The Decameron or The Mimosa, and Cubans who can only afford a pizza for ten Cuban pesos (and barely that). Now money also divides us between Cubans who can access the Internet, and Cubans who never will nor care to, because first they need to think about eating. You can’t think about having information, unless you have a full stomach and more or less decent clothes to dress and clothe the family.

I guess that’s the difference between my two neighbors. One of them can afford to discard Granma in favor of the internet as an information source (I don’t know if he’s aware that not everything that is published on the Internet is reliable); the other goes along with the official national press that does not cost more than two Cuban pesos, even if you buy from resellers.

A year ago, I complained that Cubans only had access to official national information media, which contained information that the Party-Government’s interest in our consuming, processed in the way that the Party-Government’s interest wants us to have it. Now you can go into the rooms that have opened in the country, and pay for services to navigate the web (national and international) and email (national and international). It’s not news that one hour of internet costs 4.50 CUC, just over $ 5 US and just under half the monthly salary of a worker. The cheapest is the using national email only, 1.50 CUC. Well, you decide, you aren’t forced to access the internet.

I was told that these cyber rooms you could get access to the The Miami Herald, for instance, and it’s true. I was able to check a couple of weeks ago, when I decided to commit harakiri and create myself an internet account. The connection is fast, at least compared to what I knew, and yes, you can access any publication even if it criticizes the government. This is freedom of information, I thought. I can no longer talk about uninformed Cubans; there are simply poor Cubans.

That was my conclusion until I tried something as simple as accessing the blog Generation Y, by the blogger Yoani Sanchez, who, believe it or not, I had never read. I read a couple of her articles that were linked to or posted on other sites, but not her blog. The worst thing is that it took me a while to realize I could not access it. As I’m used to the internet being I slow, waited, waited and waited, watching the minutes that for me were money.

I tried the same with the blog Sin evasion, by Miriam Celaya, and that of Reinaldo Escobar. In all cases I access articles and interviews from elsewhere, but not their blogs. I repeated the operation with David Canela, a journalist at Cubanet. I couldn’t even read his articles. I also could not access the publication.

I asked the workers staff the cybercafes, if Generation Y, for example, was blocked. They didn’t know what Generation Y is, or who Yoani Sanchez is. No surprise, it happens to many people in Cuba. I explained, with some difficulty because I realized I do not know how to define Yoani: Dissident? Opposition?? Citizen? Highly embarrassing for the government? Finally I was told that such sites or blogs are blocked. Then I learned that the classified ad page Revolico is blocked too.

I could have saved money and time, if I had read the internet contract I signed: Article 9 of the generalities of the service states «ETECSA is exonerated from liability for the limited access to the content, accuracy, quality and accuracy of the information posted on sites …»

Now I’m not sure it is enough to have money. Things do not seem so simple. You can pay, but that does not guarantee that access to the information that interests you. You do not decide what information to consume. In the end will we be only poor? Or we also uninformed?