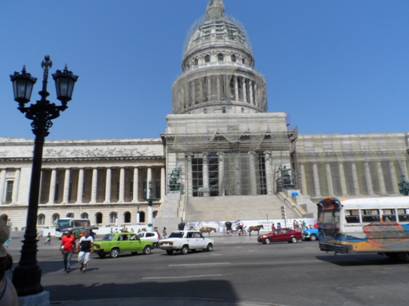 Two years ago, after a lot of red tape, long lines and pointless waits at Immigration, the Spanish embassy and the Plaza Military Committee, I finally managed to get the son of a friend — a woman who lives overseas and who had granted me power-of-attorney — exempted from military service so that the family could be briefly reunited.

Then, a few days ago, she, her husband and her son decided to come here on vacation to visit family. Everything seemed to be going very well. The joy of being reunited with family and friends helped mitigate the enduring economic hardship and deterioration of the country, which are very noticeable to anyone who comes back after spending time abroad.

The night that marked the return to the “mother country” finally arrived but a new odyssey had just begun.

After checking their luggage and paying the 25 CUC per person airport exit tax, an immigration official informed the couple that they could leave but that their son would have to stay behind because he had not yet completed his military service. Of course, the parents decided to stay with their son, but this meant losing their airline tickets, the exit tax they had already paid and the time spent waiting for their bags to be returned. There was also the anxiety and aggravation caused by the incompetence of the system.

Very early the next morning the three of them headed to the Military Committee to clear up what was clearly a big mistake. The excuse they were given was that the error had been committed by a “neo-fascist” who, fortunately, no longer worked there. From there they went to Immigration to resolve their son’s status.

Finally, after waiting for four hours due to a system-wide computer failure, they left with their problem resolved. The officials offered their apologies but did not offer the couple any sort of reimbursement.

As a result of all this they have had to forfeit their tickets. The earliest date the boy and his mother could get a return flight was October 8, which meant the mother would not be able to get back to work on time and the boy would not be able to take his upcoming exams scheduled for September 1. Given this new predicament, the parents went back to the Military Committee to request a document explaining the situation which they could give to their son’s school in Spain. Their request was denied, the excuse being that officials there were not authorized to issue such a document.

My friend’s husband, who did finally manage to get a ticket, will have to leave tomorrow to get back to work. He will try to explain the situation to the administrators at his son’s school in the hope that they will allow the boy to take the exams upon his return.

When they came over for a visit today, they told us that, unfortunately, due to this recent experience they had no intention of returning to Cuba anytime soon, at least not until they could forget everything that had happened to them.

All told, this may appear to be no big deal. But, to appreciate it, you had to have to experienced it. This is why, when they finally overcome all the obstacles and absurdities and manage to finally leave the country, many Cubans swear to themselves they will never return for fear of having to relive their bad experiences.

When she told us goodbye today, my friend recalled a line from an old song: “To Rigola I shall not return.”