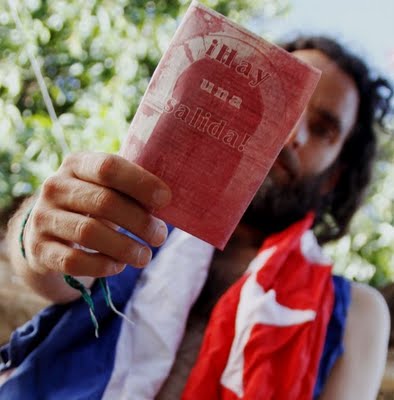 I was at a trial. A trial where they decided whether I could leave Havana for New York. Because a little is all that protopolitical paraphernalia of paperwork to get the “white card” or “liberation” in Cuba.

Nancy, who in real life and without knowing me in person had been deceived with false evidence about me, was on my side. There was a huge auditorium and on the other side of the glass you could see a futuristic city (New Yorkavana maybe), and she just asked me not to say anything more (like this column I suppose), she only if I remained silent about the attacks of lawyers and prosecutors, only if the atmosphere didn’t get any hotter with my shouted ideas, only thus could she help me. Help was giving me permission to leave Cuba, signing the Letter of Invitation of the Americas Society that lade week I left at the UNEAC office. As if it my citizen passport stamped with a Made in USA Visa wasn’t enough.

Rolando Pulido would laugh, so my girlfriend remembers, and even drink something alcoholic right in the middle of a court session, without anyone scolding him for it. He was a kind of an elf beyond good and evil and, from my girlfriend’s description, it’s obvious that he was a little in love with that vision. I suspect that Rolando Pulido in this dream was the incarnation of pure freedom.

My girlfriend woke up very sad today. She told me everything all at once (and if there is something more it’s because I invented it without betraying the spirit of the dream. She told that this dream, rather than optimistic, was a bad sign. And I believed it. The oven is not for little jaunts. But UNEAC and Nancy Morejon, as president of the Writers Section to which I have belonged since November 2002 (although not even she imagines it), now has a moral and institutional responsibility in its files. They are required to arrange it because (1) they have already approved the paperwork to send the Cuban poets Reina María Rodríguez and Juan Carlos Flores to New York (that is, there are no political problems with the organizers in the USA), and (2) the Director of International Relations explained to me in great detail that with a USA Visa my private passport (not official), the paperwork back and forth from UNEAC to Immigration of MINIT (two institutions very close: both on 17th Street in El Vedado, I mean).

Later, on the street Jesus del Monte, rather deformed, today 10 de Octubre Street, a granpa gave us one of those Christian pamphlets that remind you that your death might happen today and that we still haven’t done enough around us. The title of the little pamphlet can be read in the photo with this post: “There is an exit!” And I said to my girlfriend under the killer son of three in the Cuban afternoon, “This is the antidote that was lacking to neutralize your dream. Tomorrow I go with my best comrade’s face to UNEAC. Damn, now I think I’m going to the literary conga in New York…!”

And my girlfriend broke into tears among the old American cars from more than half a century ago I didn’t know whether from joy or pity for her or for me. Even now I don’t know. Maybe I write this so you can help me, please, to find out. You, and you, and you of course. And anyone who reads this letter with no envelope: including, as honorary members leaving the neurons of a Cuban girl, Rolando Pulido and Nancy Morejon.