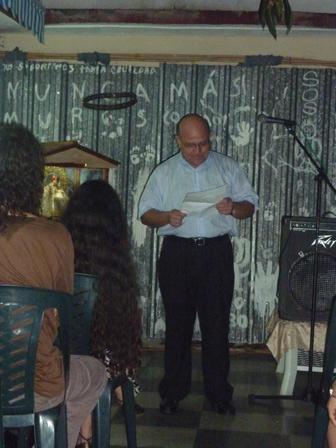 Dear Prize Winners, Ladies and Gentleman of the Jury, Friends:

Coexistence Magazine, less than three years old, begins the journey of literary and artistic competitions, next to the wall of a family that has given us a home without borders. After three years spanning the distances, we could mimic the famous poet Fray Luis de León who paid dearly for translating the Song of Songs [during the Inquisition, and when he returned to the classroom after four years in prison, he began his lecture with]: “As we were saying yesterday.”

This is another night of resurrection. We know. Today we can’t fail to recognize the legacy of those Stained-Glass Contests that over more than a decade appreciated and promoted the Cuban literary creation. Then from our original Cathedral, and now from this cathedral of palm fronds of all those who rebuild the national civic fabric.

Any resurrection emerges from some previous life, undoubtedly, but it also opens the door to a new life. This is a small crack for the light of civil society in Cuba. May the multiple chinks in the door that illuminate the interior of the island be joined together. An aperture for humanistic creation and academic skill. Another way to serve the soul of a nation. An homage to those who offer their lives, as martyrs, for her and for us, like Zapata, like Fariñas, and others.

If a Contest has the future of its jury or of its prize winners, that of Coexistence already lives in the greater fullness from its seed. Thanks to those who believed and trusted and sent fragments of their spirit and their letters.  Thanks to those who discerned the finest and offered their time in this exercise that is always threatened. A stellar jury, with Santiesteban as an angel of continuity with his “Libertad de la Luz,” of three years ago when we plowed indoors; Yoani, Pardo and Reinaldo like the innovation of these times of sowing in the open air, Maikel presiding over them in the love of weaving coexistence for the future vintage in the national home.

But first, now, there are signs of pain hovering over the Cuban house and, in its gestation, flutter the oasis of life, like this. We know, however, that the last word is Life. The course of civic formation of the Coexistence Gatherings today finish their third year, and in this small contest inaugural could be other seeds of the harvest to come.