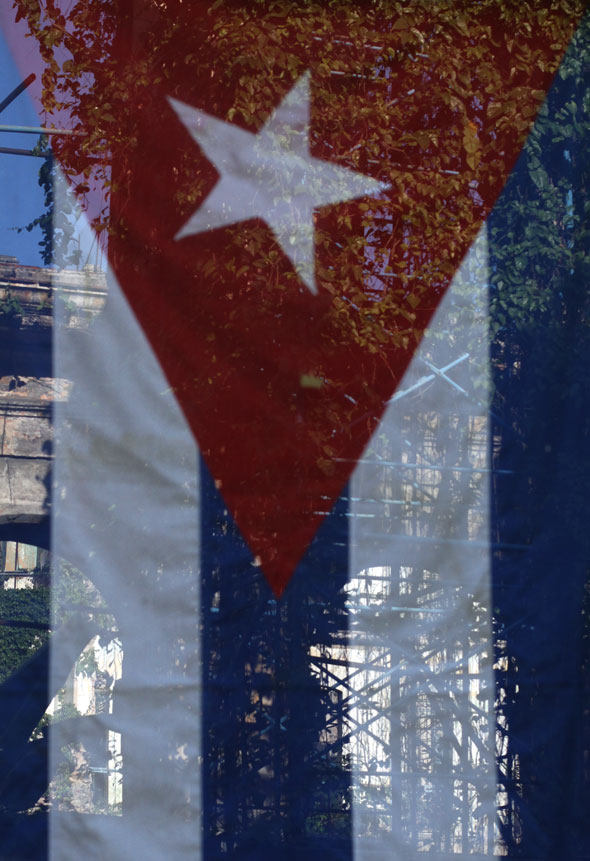 I climb the hill drawn by the magnetism of the chapel, by the theology school of the Dominican friars ( in spite of the torches of the Inquisition ) by the alpha and the omega, the cloistered life of the monks confer to my church a special something. “What is it to love thy neighbor? If we love everyone, we make no distinctions. On this morning, I feel a crazy love for Gorki, for El Sexto, for Ferrer, and for the Patriotic Union of Cuba.

Today I was thinking in my heart that it’s very easy to put a Christian to the test by obliging him literally to love his neighbor while in the gelatinous conscience, victims can be forgotten, that is the same as forgetting ourselves or even giving ourselves the luxury of not knowing them, which is equal to not knowing ourselves.

This is the moment of the performance, of not going off to fill our stomachs, to corner ourselves as if we were already at the margin because there are others who are suffering for us while we still have food and an enormous ego to pray only for ourselves. What shit is the conscience that can go to sleep so quickly. Because it’s known that even murderers love their families, they have cats and dogs, little fish and cry at the opera or some other trivial crap.

But they’re still bad and if the conscience turns to jello, it forms common cause with the bad. To have faith is to become an arrow of steel. For that, it’s been a while now that I don’t want to give the greeting of peace to the poor of Augustine and today I’m almost not able to look at her. She’s served me as a reference in order to say to God: “the brothers of this saint are guilty. Save us from the brothers of this saint who comes here and I don’t want to join in her prayers.

Cardinal Jaime Ortega, the hunger strike of Coco Fariñas, the perseverance of the Ladies in White took many years to obtain the freedom of the 75.* As a Catholic, I remember also that it was the Bishop of Santiago de Cuba who appeased his heart in order to intercede on behalf of that ¨Lord of the Flies¨ and in a very short time, managed to free him. That brevity with which the previous dictator** pardoned the armed attackers of a military barracks did not serve the decrepit rebels in avoiding the death of Zapata Tamayo, and distort the denunciation he made before dying that “El Jefe” of that armed assault was cooking spaghetti in his cell while the prisoners of Castro-ism were dying in cells blocked from any light. The whores of the regime were saying on television during those days that Zapata was crazy, that he was wanting to turn his cell into a suite and that’s why he was on a hunger strike.***

Is the fist of some brutish thug incapable of dialogue and of speaking the truth also waiting for me? But I keep saying that life without Christ is short and pray to my Lord and Savior that hell be closed around those responsible for this nightmare, in that death without resurrection, definitive, and without compassion. I know that Christ died for all but he also left open a path that the dictators of the Revolution have wanted to ignore. Now I plead to God to in turn ignore those who Him, that they be left unnamed and in this moment there will be light in this land (a Word from You will suffice).

And that you forgive me for not being able to forgive. I have no other strength nor hope other than God. Why is it that we have to surrender the idea that this world could be more than a vale of tears ? Here they’ve tried to spread the idea that this is a problem of Cubans and they don’t consider Cubans those who have emigrated, so that here on the island disarmed Cubans facing the knives of the regime are not even respected! If we plead for help, they accuse us of being mercenaries; why do they keep believing this story? They don’t see that this problem is everyone’s problem?

And above all, why is that what we had called the “invisible border” (this is what a wonderful Cuban blog called it ) they have invented “International Committees” of the left of the world to threaten even our great grandchildren, spreading their filthy doctrine that conceals such violence under the banner of the dispossessed and forgotten. There has to be another alternative which I would say is the Gospel but not to be forcibly imposed because that would be a crime against the soul, a treacherous one.

The Gospel is a an individual sacrament, a narrow road, a transformation of the conscience that many have called a “conversion” only with which one can achieve freedom. Perhaps our egoism should be cured by organizing networks of rescue for those less favored in life, to return the favor and not in order to condemn them to eternal poverty and lack of opportunity, to give to each and every one of them the dignity of the person, without killing anyone nor imposing on anyone neither ideology nor religion. But this is something the state can’t do and neither can a political party do because this would require condemning a society to a dictatorship.

Castro-ism is hypocritically speaking, worse, a false doctrine of the worst kind and if it is not stopped now, it might trap everyone. Above all, because in Castro-ism the poor and the forgotten will always be poor and forgotten and there will emerge as always, a Pharisee sect within the “Revolutionaries” that will not pardon any poor and forgotten family whatsoever if they incite indignation against them. This is a problem for the entire world. No-one should sleep any longer. No-one knows where the stone that is thrown today will fall.

*”The 75″ are seventy-five individuals arrested in the “Black Spring” crackdown on political dissent which took place from March 18 to the 21st, 2003.  They were accused of being on the payroll of the United States and given sentences ranging from 13 to 27 years. By 2010, many were exiled to Spain.

**A reference to Fulgencio Batista who pardoned the attackers of the Moncada Barracks after their attack. Among the attackers was a young attorney named Fidel Castro whose candidacy as a member of parliament ended when Batista cancelled the elections.

***Zapata Tamayo died while on a hunger strike in prison on February 23, 2010 at the age of 42. He denounced the conditions of prisoners in Cuban jails among other denunciations, stating that prisoners deserved the same conditions that Fidel Castro enjoyed while he was imprisoned for his abortive 1953 attack on the Moncada Barracks in Santiago. The Cuban government stated that his hunger strike was for a TV, a stove, and a phone in his prison cell.