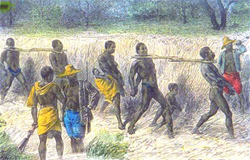 Translator’s note: This blog post does NOT relate to Angel’s most recent arrest this week. It relates to a series of criminal charges the regime fabricated against him in order to be able to imprison him as a “criminal” rather than as a “political prisoner/prisoner of conscience” for his writings.

Last Monday they finally decided to open my case to public view after three years of continuous torture and false investigations, after the prosecution withdrew more than five charges that came with the exorbitant sum of 54 years in prison — which with still other charges added another thirty years, so the total would be close to ninety years of imprisonment for me — but some powerful hand decided dismiss them, because they understood that they had not managed to make me afraid and make me quit my blog: The Children Nobody Wanted, and also because international opinion made them look ridiculous.

The trial was held in the special chamber of the Tribunal in the neighborhood of Vibora (not coincidentally the name of the reptile “viper”), for “known counterrevolutionaries”; there they also tried Sebastian, the Spaniard who served several years unjustly; the 75 prisoners of the Black Spring, also innocent; and, recently, the U.S. contractor Alan Gross who is serving an unjust prison in Cuba.

When we arrived at the court the members of “State Security” were already assembled on the perimeter, in my honor, a peculiar deployment in the style of totalitarian regimes. There were official police cars parked there and some covert interceptions in surrounding the entire area. They also had at the ready the famous paramilitary mobs, the supposed “enraged people” who throw themselves on the Ladies in White and the rest of the opposition, which, according to the official version, “come spontaneously to undertake acts of repudiation,” who looked at us coldly, full of hatred, like the hounds of the ranchers, eager to jump on the escaped slave at an order from the master.

As expected, the prosecution presented no plausible or forceful evidence, merely expounding with hollow words, lacking the slightest credibility. The laughable part was when the expert, Lieutenant Colonel, said that, based on calligraphic tests, I was guilty, because of the idiotic detail of the size and angle of my writing. My lawyer asked if the expert if this was a hypothesis, an evaluation; what the officer said was he was 100% sure that I was guilty and that there was no margin for error.

That was the “evidence” presented by the prosecution, and, for that reason, the request remained for six years in prison. That is: I will be found guilty only of something as vague and imprecise as the size and tilt my handwriting? I think I’ll be the first writer accused in the history of mankind for writing with “some” tilt, and drawing my letters in a very suspicious size.

However, by the Defense presented a variety of witnesses who claimed my innocence regarding the false charges brought against me. The defense showed, in addition to the lack of knowledge of the literature in the expert, errors in structure, form and fact in the accusations and exposed false prosecution strategies, and its failed attempt to try to trap an innocent person who had convincingly more than demonstrated his innocence regarding the charges against him. The defense also mentioned a number of authors that scientifically demonstrate that calligraphic proofs are not an exact science, and that their results can not be used as “unequivocal” evidence, due to the wide margin of error that exists in every evaluation.

According to friends who were present at the hearing, some of them lawyers, former judges and former prosecutors, they said it was a shame that the prosecution presented such an obvious farce, and that, surely, there was no doubt that it had been shown that the charges brought against me had no seriousness. But some assured me that, before starting the trial the decision was already determined, that the verdict is not decided by the judges when there exists, as in my case, a political criterion to decide my innocence or not.

Also attending was a representative the “Union of Writers and Artists of Cuba” (UNEAC), and the legal entity representing that institution, who remained at the trial, and said that, from his point of view, they should, without any doubt, dictate my acquittal.

Finally it finished with the conclusions for sentencing, which the Judge would dictate in the coming days, but not before warning me that if I did not concur with the opinion, I would have ten days to appeal.

I insisted, as an innocent person, that I would not accept even a five peso fine, and that I would serve any time in prison to which I was sentenced, from the first day on hunger strike.

Upon leaving the court, one of the agents of “State Security” reported by phone that they did not need to send anyone, that what they expected did not happen, that everything was in order and in tranquility, and no “indisciplines” had been committed.

I did not give them the pleasure of abusing those who wished to seek justice for me, and showing their disagreement with government abuses to the opponents of the regime. They were expecting some “indiscipline” as an excuse to beat us. Anyway they saw us marching and their eyes stabbed us in the back.

Now come the hours of waiting for the sentence, that will be rendered against the decision of an honest Cuban to inform the world, through his blog, of the abuses committed by the Cuban regime.