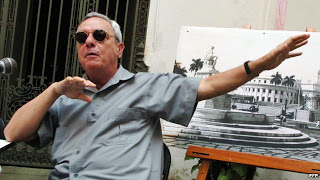 Recently I learned, although it has not yet been publicly announced, that the Havana Historian Dr. Eusebio Leal Spengler, has retired his economic motor: “Habaguanex.” I am sure that this gentleman will come to be known as one of the few citizens of the Cuban Archipelago who, in the last 54 years, has done commendable and consistent work to improve our country. I believe, without equivocation, that if free elections were held, he would surely be one of the candidates for president of the nation, given his charisma, intelligence, sacrifice and honesty.

I have also been unable to avoid learning that his trusted men in the construction of “Puerto Carena” are being prosecuted for embezzlement. And now the so-called “domino effect” has begun. It has been served up on a silver platter to the Castro brothers, who for a long time have wanted to sink their teeth into the money that is spent on the historic district of the city of Havana. Without Dr. Eusebio Leal, a great part of it would have collapsed and millions of dollars that now dance in the state coffers would be absent.

Now, in place of Habaguanex, will be some ex-officer of the “armed forces” who responds blindly to Raul Castro and, of course, the deterioration and lack of control will be greater. The analysis of the problems should not focus on the consequences, I have repeated many times, the misrule of the Castros always does the same thing: throws out the baby with the bathwater to avoid getting at the root causes that force the great majority of people to survive with what is within reach of their hands. It is no secret that Old Havana has recovered thanks to the close management of the historian; and also, unavoidably, the housing reconstruction in general has been healthy for the black-market that thrives throughout the country and which, some day, will require a monument of its own as a great savior of the Cuban people.

I sense that the success of the work of the historian is due to the independence he had in all these years of arduous labor, such that he could give us a palpable image of revival the place where we come from. Now I fear that if the economic base necessary to continue his work of safeguarding one of the most beautiful cities of the Hemisphere slows or stops, our architectural history, which is part of our insular essence, will be in danger of extinction. And, without the spaces that are ancestors created, we will never be able to orient ourselves in this labyrinth of confluences that was “St. Christopher of Havana.”