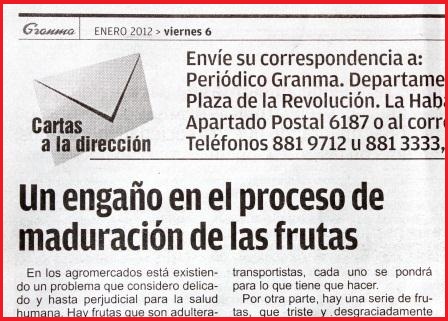 A “Letters to the Editor” section in the newspaper Granma, showing a letter titled “A deception in the process of ripening fruits.”

It never ceases to amaze me. It turns out that Granma dismisses the seriousness of the case of two Cuban doctors disbarred, for over five years now and for an indefinite time in the future, from the practice of medicine in their country, for giving the minister a document that talks about wages that was signed by 300 healthcare professionals, meanwhile, it prefers to publish a review of green and ripe bananas.

The same section “Letters to the Authority” that decided not to publish our case for several months and that led to “… for your attention and response …” to the same Ministry that punishes us gratuitously, does not follow the same protocol with the banality of cases like that cited, which should be sent, at the most, to municipal or provincial offices.

I’m moved to laughter by the fact that that section prioritizes this case over others such as our own, and those even more serious. In their ethical myopia decide to “see” miniscule deception with regards to the ripeness of bananas, but choose to “not see” the impudent and outrageous fraud perpetrated on the MINSAP. It is cases like this that have made the Cuban press lose credibility with the people. Definitely they do not respect it.