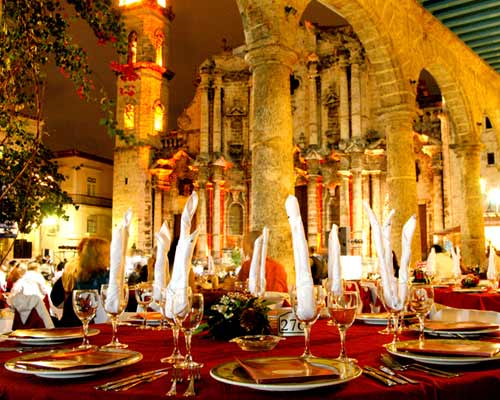 Plaza de la Catedral, festooned for the Year End Grand Dinner and which some new Cuban rich must have attended. *See below for dinner menu.

They are not as ostentatious as the new Russian rich who buy compulsively and empty the shelves of Marbella. Nor do their lifestyle and expenses have to do with a Qatar millionaire who for pure pleasure buys a bankrupt European soccer club.

The new Cuban rich have a different stripe and behavior. “There are several castes. There are the life-long privileged: ministers, managers of healthy businesses or generals who have exchanged the olive-green uniform for a crisp white guayabera. They may eat shrimp and drink Spanish red wine,” says an ex-official.

In his opinion, it is a very special class. “It is accessed by family genes, loyalty or sycophancy. But it is an exclusive preserve. Depending on their rank, these revolutionary burghers may have a yacht or even a Hummer.”

A person who knows about power says they usually go to Ibiza or Cancun on vacation. “They are above the law and the Constitution. By divine decree, they can have cable antennas, internet at home and several cars. They don’t need to turn off the air conditioning to save energy, and when the dollar was prohibited, the supposed enemy’s banknotes were in their wallets.”

There were and still are other kinds of “rich.” People call them “flowerpots.” It is a colorful fauna of petty thieves with white collars who swipe a few million pesos and abound in various levels of government ministries.

“They carry the party card for convenience or pull you into a lecture replete with revolutionary slogans. This caste has learned how to spin the system,” says a lady who was a servant in the home of a manager.

Common and ordinary Cubans know that they ride in State cars, with gasoline from the State and that they steal from the State. That they invest in family businesses. And under the mattress they keep dollars and euros, among other currencies. “The most intelligent defect on an official trip and with stolen money set up a discreet business in Florida,” asserts the ex-official.

The man on the street also knows that the number of private entrepreneurs who are earning quite a bit in their businesses is rising. Also, that in Cuba there exist the “body smugglers.” People who have always lived on the margin of the law. Selling drugs, brand name clothes, pirated perfumes, houses or cars.

And with the money saved, the ’body smugglers’ open a cafeteria or rent rooms to foreign tourists for 30 dollars a night. Other privileged people are the rich “de flay,” that is, “the Cubans who thanks to remittances sent by relatives in Miami, who in order to sustain the way of life of these bloodsuckers, often have two jobs,” says a retired teacher.

They all, from the olive-green caste to the rich “de flay,” demonstrate the difference from that vast majority of the population that eats a hot meal once a day and relieves the heat with a Chinese fan.

The new rich can afford the luxury of dining three times a week in a private restaurant and paying 150 CUC for a set menu at the Plaza de la Catedral in order to eat delicacies and await the new year listening to Isaac Delgado.

Some envy them. But, in general, Cubans accept the new rules of the game. They see well that their neighbor may have a business, make money and stay at a Varadero hotel.

And that the State may sell cars and permit you to travel abroad. They applaud the elimination of the absurd double currency and ask for better salaries, with the hope that someday they too might eat in expensive restaurants or visit Cayo Coco.

What people reproach is the hypocrisy of the regime’s leaders. That they speak in the name of the poor while they live and dine like the new rich from Russia. That’s why, when many Cubans see Raul Castro, it seems to them that they are observing Vladimir Putin. Maybe it is an optical illusion.

*Dinner Menu — In 2012 the set menu cost 100 CUC per person (about $110 US), but in 2013 the business Habaguanex raised it to 150 CUC, a worker’s salary for seven and a half months. What was offered on the menu would have filled the stomachs of the residents of any block from Central Havana, Marianao, Arroyo Naranjo or San Miguel del Padron.

Variety of rolls and breadsticks accompanied by pate with cheese flavored with basil and pimento. Desserts: Cheesecake and guava with candied apple and coffee caramel sauce. Assortment of Spanish nougats and good luck grapes. Brews: Cuban coffee and varieties of tea.