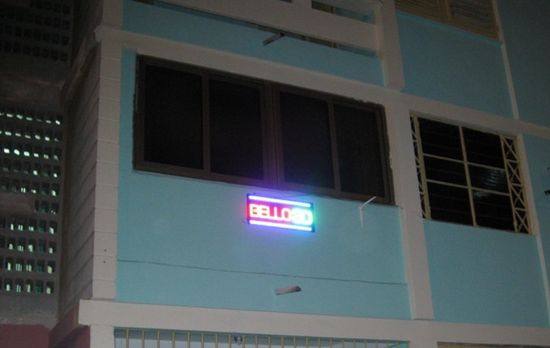 Robert is closing down his 3D movie business. He has put a price on the projector, the glasses, and even the popcorn machine. He was only three months into the business knows he can’t recover his investment. A briefing note in the official Cuban press ended his entrepreneurial plans. He was forces to close the same week he had planned to start showing children’s movies in his air-conditioned room with cushy armchairs.

Of the more than 442,000 self-employed workers in this country, a good share of them have been affected in recent weeks by new legal restrictions. The Granma newspaper announced the immediate closing of the private movie and videogame rooms, suggesting that these had never been permitted.

Certainly the list of the more than 201 private licenses don’t include film projection, nor computer rooms devoted to entertainment. However, entrepreneurs have taken advantage of a small crack in the law, to operate. In a short time, these “neighborhood theaters” began to appear all over the country, some luxuriously appointed, some very modest.

Perhaps something that annoyed the State is that the three-dimensional projectors were introduced to the country by private hands. Or that the once powerful Cuban Institute of Cinematographic Art and Industry (ICAIC) saw that some small businesses got ahead of them on implementing such a new technology. The State apparatus sees itself threatened with losing the monopoly over the broadcast of audiovisual and places where it happens.

On the other hand, the private 3D rooms brought a lot of people back to the idea of neighborhood movie theaters. For example, in mid-20th century Havana, including the municipalities of Regla, Guanabacoa and Marianao, was host to 134 movie theaters. Some of them with between 1,000 and 2,500 seats, including lower level and balcony. The main ones came to have even as many 5,000 seats, like the Payret, the Radio Central (currently the Yara), the Metropolitan, the Blanquita (today the Karl Marx).

Of these, only 12 theaters remain active, largely in the most central parts of the city. The concept of nearby and intimate space, where you could go most Sundays, is unknown to Cubans under 30. So this opening of movie rooms by the self-employed, awakened memories in some and surprised others.

The programming of these new spaces, was based primarily on action, horror and animated movies. Halloween night, 48 hours before the ban that would close them, the 3D film rooms showed a wide range of “nightmare” movies. It was an advance premonition to what their owners would experience two days later. Spiderman, Avatar and Jack and the Giants were some of the productions that paraded across the private screens. Entertaining movies with no major artistic flights, but very popular among Cuban youth and children.

At the last congress of the government-sponsored Hermanos Saíz Assocation — an organization of young artists — one of the most striking approaches was their coming out against movies promoted by the private cinemas that are “frivolous, banal and consumerists.” We must “return to the principles of the cultural policy of the Revolution,” some cries. It was only a matter of time before the government ban would fall in the private theaters. Because it was known that the Cuban government, given a choice between extending the limits of the current legality, or maintaining it despite the reality, I would opt for the second.

Fear of independent dissemination of information, a political strenght-testing gesture, a backward step in the economic reforms. All this and more is hidden behind the new restrictions against 3D movies and videogames. However, it’s difficult to control a phenomenon that has gained so much popularity and whose technological infrastructure is already in the hands of so many Cubans.

Many, unlike Roberto who is unloading his equipment, plan to continue underground. The magic lantern will shine again behind closed doors, more discreetly, without neon signs, and without the aroma of popcorn escaping from the room.