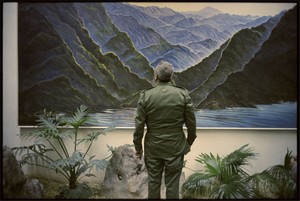 According to historical accounts—which in this case are obviously told by the victors—one morning in December of 1958 Fidel Castro observed from his command post in the mountains of the Sierra Maestra a ruthless attack by the air force of Fulgencio Batista. After the aerial raid he wrote a letter to his secretary, Celia Sánchez, in which he described the destruction caused by the bombs, which had been provided by the United States, and issued a prediction: Henceforth, his fight would be against “Yankee imperialism.”

The relationship between Castro and the neighbor to the north is a story of love and hate. During the Second World War, when he was still a beardless boy, he wrote a letter to the American president, Franklin D. Roosevelt, informing him of large deposits of nickel and copper in eastern Cuba. In exchange for this information, which the adolescent Castro considered confidential, he demanded ten dollars. Roosevelt did not acknowledge receipt of the letter. According to some psychologists such scorn can cause feelings of long-term hatred in people with inflated egos.

Narcissists are complex. Fidel Castro grew up on a farm far from the city, where the affections of his harsh father—a former Spanish soldier who fought against the forces of Cuban independence—were doled out in droplets. By the time Ángel Castro legally married his wife and formally recognized his son, the boy was then more than six years old. His mother used to call them to lunch by firing off a shotgun. It was in an atmosphere of stories about the Spanish Civil War, which he heard from the family cook, and passionate interest in the world’s great warriors that the young Castro grew up.

At university he was a gunman, agitator and guerrilla fighter. He later became the longest serving president of any modern country. Doubts remain as to whether his fifty-year autocratic rule was the result of a carefully thought-out plan or an accident of history. In interviews he has confessed that he was always a committed communist but, given the fierce anti-communism of the times, had to camouflage his political aspirations.

I don’t believe it. The ideology of Fidel Castro belongs to Fidel Castro. There is no other like it. He wears Marxism like a ring on his finger. It is a system run by a single party without presidential elections and with almost absolute power. He has exercised authority as though Cuba were a guerrilla camp. He operates from campaign to campaign. Ever on the lookout for Yankee aggression. Promising a shining future. Building a tropical socialism that has never gotten past the foundations.

He has a bad record as an economic administrator. Not even his apologists can defend it. Today Cuba is one of the poorest countries in the continent and the one with the lowest GDP. The one-and-only comandante’s most essential political weapon, both internally and externally, has been anti-imperialism.

The enemies of the United States became his enemies. Their cruelty and tactics did not matter. From Shining Path in Peru, MR-19 and the FARC to the bloodthirsty Muammar Gaddafi in Libya and Pol Pot in Cambodia, they all at various times received political support.

The fuel that sustains his autocratic rule is the confrontation, real or imaginary, with the gringos. On the other side of the Florida Straits there have certainly been some American administrations which have resorted to destabilizing actions in an effort to overthrow him. But Castro has been no angel either. From the earliest years of his rule he has supported groups and individuals with dubious reputations.

Some such as ETA, FARC and Carlos the Jackal were trained in Cuban military camps or became terrorists. Positioning Soviet nuclear weapons on the island in 1962 was a colossal error that almost provoked a nuclear catastrophe. In letters to Nikita Khrushchev he suggested that the Russian leader fire the missiles first.

During his golden age, Fidel supported numerous armed groups in Africa and the Americas with men, weapons and logistics. From a house in Nuevo Vedado he directed the wars in Ethiopia and Angola from afar using a large-scale model with tanks and toy soldiers. He was so meticulous that he knew the exact quantity of chocolates and the number of cans of sardines distributed to his troops. When the Berlin Wall came down and the Cold War was over, Fidel Castro had to bid farewell to subversion and war games.

There was no longer any Soviet money for such undertakings. The domestic economy collapsed and those who were fed up took to the seas in rubber rafts in an effort to escape to Florida. Although the anti-Yankee harangues never disappeared from official discourse, there was a change of strategy. At the end of the 1980s high-ranking military officials, who were committed to bringing goods to the island that were prohibited by the U.S. embargo, engaged in drug trafficking and held talks with the Medellín cartel.

Castro’s friendship with the Panamanian strongman, Manuel Antonio Noriega, known for his support of narcotics trafficking, was solid. If Castro used a barrage of narcotics as means of destabilizing American society, it has yet to be shown. Many people believe, however, that someone who carried a notebook that tracked the rations distributed to his soldiers could not have been unaware that various military chiefs under his command were involved in cocaine trafficking.

Today his strongest allies are in the south. Hugo Chávez, Evo Morales and Rafael Correa are authoritarian leaders in the making who came to power through democratic elections. They form a relief unit that helps guard against the alleged overseas ambitions of the United States.

Raging against the gringos sells. It is natural to want to root for the underdog. It is the key point in the anti-imperialist discourse. When promoting global revolution, it is politically useful to speak on behalf of the world’s poor and weep for those starving in Somalia, even if you yourself are living like a sheik.

Castro is no longer a threat. Retired and now eighty-six years old, his vitriolic pen still occasionally attacks the “imperial perversion.” It is what remains of his lucrative anti-imperialism.