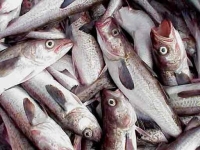 It’s six in the morning and they start coming early. They got up at the crack of dawn because of the rumor that the fish had arrived today and, as usual, there will not be enough for everyone; later it will be gone and for weeks or months there will be no other chance for the workers’ pockets.

The few workers in what was once a thriving fish industry, today in ruins, also come and avoid approaching the line: they might have acquaintances there who would try to ask them about the mysterious product or, still worse, ask them for help in ensuring their purchase. Such a thing could get them in trouble, because even they don’t know what “those who call the shots” will decide, whether the fish will make it to the market or not.

The morning wears on and people keep appearing. The sun has already hit the line and the group is scattered, with people taking refuge under some doorway or tree, without losing sight of everyone’s position.

Waiting in silence is boring so soon the spontaneity of Cubans when engaging in conversations with strangers emerges, “This is wrecked, I worked here in ’75 and we were up to our necks in fish, we had several boats and there were times we had to throw the fish to the animals because people only wanted the best and the kids and certain types wouldn’t touch it; you had to choose. Today if they offer you shit you have to buy shit, because later it disappears,” says a gentleman along in years, his skin burned by the sun.

Another, younger, who looks like a teacher or an inspector with a clipboard under his arm, intervenes, “How is there going to be fish if there aren’t any boats or fishermen, there are only four old ones left in this neighborhood, it was the killing of the fish. What’s worse, when someone catches a fish that’s worth anything, they immediately give it to the intermediaries who take it to the yumas [the Americans], who will pay for it in CUCs, hard currency. There’s nothing for Cubans.”

The conversation, beginning to get interesting, is cut off by the voice of a boy running from the beach with an announcement that “the boat is coming.” It’s difficult to know if, at his age, the boy fully understands the importance of the matter; but judging by his jumping up and down and the way he’s wringing his hands as he shouts the news, it seems he does.

People make the ultimate sacrifice and reassemble in a reasonably straight line. But almost an hour after that informal announcement, there’s no indication of anything in the visible part of the installation. Every now and then someone goes to look out and the comes back in, apparently to let people know what the situation is outside.

Finally a custodian approaches. He’s not looking good. And no wonder, they’ve assigned him the high risk mission of telling everyone who has lost half a day of their time that, “There isn’t going to be any fish sold today, the order is to refrigerate it and wait.”

People go mad, mainly the early birds. “How is it there’s no fish, it’s disrespectful to the people, this is why we’re in the mess we’re in, it’s an abuse.” Phrases that are familiar to everyone’s ears.

A woman who had been organizing the crowd comes forward and asks for the floor and tells him directly, “Look at my legs (they’re swollen and have varicose veins from ankle to toe), I’m a sick woman and I don’t have anyone, my daughter also suffers from serious health problems and I don’t have anything feed her. Do you think it’s fair that they don’t sell us the fish? Do you have children?”

Tears of indignation and sadness begin to run down the woman’s face, but a good part of those present have already left, cursing and protesting. Accustomed to these discouragements, their hateful slogan is, “Why argue, it’s all for nothing.”

Meanwhile, those who are still there have realized that, while the discussion was going on, several cars and motorcycles with sidecars, with bags strapped on the grill, have come and positioned themselves in an inconspicuous area.

By the license plates, and because in a small town everyone knows everything, there’s no doubt that these have been sent by the heads of the Communist Party, the government, the Ministry of the Interior, and other institutions, ready to take the first and only share — because no one else is going to touch a thing — their corresponding share.

They say this to the guy sent by the administration, but he just shrugs his shoulders, like someone who doesn’t have the power to do anything. The “boss” is in a meeting and can’t see anyone right now.

The sun ends up exhausting the forces, and the lady with the sick daughter is the last to leave. “I would like to be a bomb and blow up all of this,” is the last sentence of the man who was first in line.

After that experience it’s hard not to hate all the people associated with these disgraces at the territorial level: they form part of a larger system, created at the highest level of the country. And if many of those who were standing in line could work in the fishing industry, surely they would adopt the same attitudes of those who work in it today. It happens in every corner of the country. Cuban society today imposes the most ancestral sense of survival. So this is what happens when there is not enough for everyone.

The ultimate, if not the only, responsibility belongs to he who has disrupted the country’s productive infrastructure with his inventions and autocratic and unwise hallucinations. In second place, the responsibility for this growing state of misery belongs to all of us, for not acting decisively before (many still don’t, even now), when there was more to defend.

It’s too bad that the cause of all this, and his friends, cronies and sycophants, have never had to stand in line for fish.