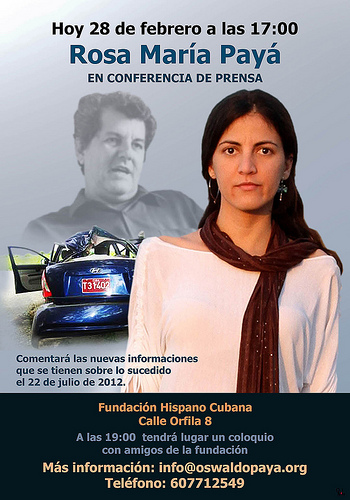 Here is a translation of that report:

Rosa María Payá stated that she had met in Madrid with the People’s Party (PP) politician, who recounted what happened in the unexplained accident that killed her father and Harold Cepero.

The daughter of the Cuban dissident Oswaldo Payá said today in Madrid that Ángel Carromero confirmed, on her arrival in Spain this February 16, that a vehicle rammed them off the road in the unexplained accident that killed her father and the opponent Harold Cepero on July 22, 2012, near Bayamo (Cuba).

During a press conference — in which the Swedish politician Jens Modig Aron, who was traveling as copilot’ in the car driven by the New Generations of the People’s Party politician — Rosa María Payá also said they were considering legal action.

Payá’s daughter claims that Carromero — sentenced to four years in prison in the Communist island after a “rigged” trial — is not guilt of the “probably murder” of her father and Cepero, and therefore should not be treated as a criminal in Spain.