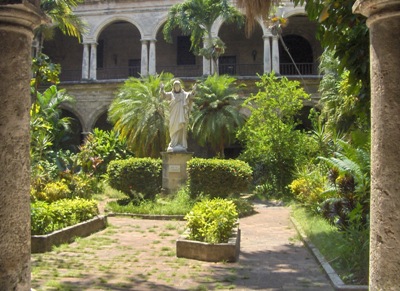 Under the title, “The place of citizenship, political participation and the Republic in Cuba,” the Padre Felix Varela Cultural Center was the scene, Saturday, July 2, of a lecture by a lawyer and university professor, Julio César Guanche. The institution, belonging to the Archdiocese of Havana, occupies the building which, until last January, was the site of the San Carlos and St. Ambrose Seminary, where Father Felix Varela y Morales, in the early nineteenth century, held the chairs of Philosophy and Constitution, from which he developed a cultural, educational and civic work, leading to the formation of thinking about Cuban nationality.

In his opening remarks, the president of the Yosvany Carvajal Cultural Center explained that this new area of thought, studies and discussions, will begin its academic functions this coming September and later other educational and cultural functions will be added. The Julio César Guanche conference was a final rehearsal prior to opening.

There is nothing more opportune for the Cuban sociopolitical reality than the issue of citizenship and political participation. In this sense, the young Cuban intellectual’s dissertation began with the words of Felix Varela at the inauguration of the Chair of Constitution in 1821: I would like to call this Chair, the chair of freedom, human rights, and national guarantees, of the regeneration of the illustrious Spain, the source of civic virtue, the basis of the vast edifice of our happiness, for the first time among us has reconciled with the philosophy of law … which contains the fanatic and despotic ….”

Among other approaches, Guanche addressed issues concerning the legality of contemporary Cuban society and the need to create and use spaces, actual or potential, to exercise citizenship through keys defined by Felix Varela. He noted that despite the statistics displayed by the Cuban authorities regarding the high popular participation in elections, the electoral system leaves in place conflicts between institutional and citizen participation and he added that government programs at the local, provincial and national levels are not defined through the electoral process. Thus, the role of citizens and their political participation in Cuban politics became an axis of intense and respectful debate among intellectuals, academics, scholars and journalists present, of all shades, on how to build power, to confirm power, expand power and to use politics to broaden the ways of living together: a practical testimony to the necessity of discussing vital public issues of our society.

Interventions such as those of professors from the University of Havana, Berta Alvarez and Maria del Carmen Barcia, regarding the Cuban constitution and the concept of citizenship, respectively, and the writer Victor Fowler, who explained the difference between the formation of citizens and revolutionaries, proved the appropriateness of the invitations from the editor of the magazine Espacio Laical.

Father Varela, whose name heads the Cultural Center ,was the first to speak in Cuba about the concept of homeland encompassing the entire national territory, of belonging, rootedness and interests, he evolved from autonomy to become a promoter of independence; he moved from the good treatment of slaves to the elimination of the horrific slave trade and the abolition of slavery; he chose education as a path to liberation; he plotted his own course to Cuban thought and insisted on teaching us to think; and in addition, he introduced ethics in scientific, social and political studies. For all that this great teacher, who also held the José de la Luz y Caballero Chair of Philosophy, defined as our real civilization.

The conference and the current debate also revealed that the work begun by Varela 190 years ago is not only unfinished, but pending. Indeed, just two weeks ago the President of the State Council of Cuba, Raul Castro, said in an enlarged Council of the Council of Ministers: We need to discuss and disagree over all levels of management, because in a diversity of views are the best solutions to our current problems. A limited truth, as the diversity of opinion must be extended to public debate.

In a society like Cuba’s, lacking an independent civil society, it is about promoting dialogue as a mechanism for participation and exchange of ideas, without which any project of social transformation cannot succeed, although headed by the Communist Party. In Cuba, for known reasons, people are tired of being objects of slogans and speeches. It is necessary that individuals involved in the survival become public, until the deliberations are transformed into a source of perfecting governance. It is therefore essential to open the doors of politics, whose starting point begins with the exchange of ideas between all parties to identify common interests, to propose measures before they are implemented or are in the process of being implemented.

The policy, whose definition is derived from polis, as the ancient Greeks called the city, from its beginning was related to public activities to ensure the common good. That is, politics like human invention began from the time when communities realized that their fate was subject to decisions to survive. Politics is just that, a relationship between people with common interests to solve problems and, therefore, it predates and transcends the class division of society, and is a natural human activity that requires participation, learning by doing, making mistakes, to become true citizens.

The challenge lies in transforming individuals into citizens, into political actors. A transformation that has its starting point in universally recognized human rights, particularly in the first generation of civil and political rights. This process of civic education and the formation of currently non-existent public opinion, requires acting from ethical and moral principles that place the human being as an end and not as means.