Approximately four years into the process of the reinstatement of private labor in Cuba, official data acknowledges the existence of over 400,000 “self-employed” throughout the country, representing a percentage of workers that pay taxes to the State, a force to be reckoned with, given their great tax contribution to the State and the jobs they generate, that is, close to half a million individuals producing foods and services, offering income to others, and contributing to the country’s economy, supporting at the same time the State and its many institutions which are just as parasitic.

The authorities, through their media, have been insisting on how important it is for Cubans to gain experience and awareness regarding the “tributary culture” (paying taxes), since the era of “state paternalism” ended, along with its policies of subsidy; everyone should strive to earn a living based on their own capacity and resources to safeguard the revolution’s social benefits, namely the supposedly extraordinary standards of health and education that we enjoy on the Island.

Cynicism aside, the logic of the need for a tax culture is undeniable in any moderately functional society. But in the case of Cuba – are we ever going to stop being a “case”? — It appears that the tax culture that we now aspire to, which was destroyed by the government with the Revolutionary Offensive, is destined to flow in only one direction: from those who provide the tax to the tax institutions, but never the other way around.

Thus, a particular economic variant comes into play in virtue of which the producers must assume the burden of a heavy tax to the State, but the State is not required to report the amounts collected or the fate of the funds collected. 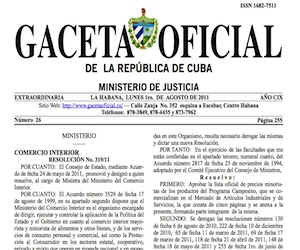 But there are longer standing taxes whose fate is also unknown. For decades, Cubans have contributed taxes to the Sate-party-government through a system of evaluations from multiple quasi-State organizations that it created.

For example, if we use the official statistics, which indicate there are about 3 million State employees whose average salary is 400 pesos, and if we consider that they are affiliated with the Workers Center of Cuba and, as such, they donate one work day each year destined for a non-existent territorial militia, their contribution in this context would be about $50 million annually — about 16.66 pesos per capita — not counting what they pay in dues to their unions, which, paradoxically, represent the interests of employers, who benefit both from what the employees produce as well as what they pay into the unions.

Recently a friend and colleague speculated about the contributions of the 800,000 members of the ruling and only party. Using an extremely conservative estimate, my friend found an estimated 50 pesos per year per militant, which produced $40 million annually in contributions to the State.

In addition to these estimates, there are taxes collected from mass organizations, such as the Committees for the Defense of the Revolution and the Federation of Cuban Women, a minimal amount, but significant because of large number of their affiliates, or the Young Communists Union, “the revolution’s youth vanguard”, in which both students and workers are active.

All these organizations, in turn, are supported by a monstrous (and expensive) infrastructure ranging from office buildings, furniture, fleets of vehicles, employees, materials and resources, even wages, fuel costs and electricity, etc., producing absolutely nothing.

As for the huge bureaucratic apparatus of government and its repressive forces, it is impossible to calculate their living costs. In this sense, many Cubans, especially the so-called “self-employed”, have begun to do their accounts and they wonder if it is not too much of a contradiction to help support the same system that plunders and represses and that, in addition, continues treating them like lepers.

Because, at the end of the day, the tax culture is not — as the government pretends — the imposition of a consciousness of servitude to the Master State in order to keep supposed supreme ideals that, so far, only benefit the State. The tax culture is born and consolidated from the self-awareness that individuals acquire when they reach economic independence, a road that sooner, rather than later, will have to start to flow in both directions.