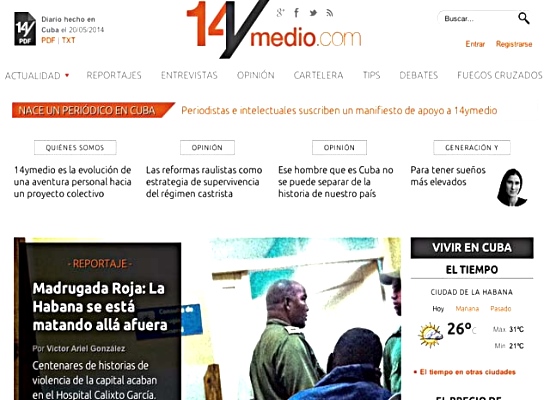 The members of the Taliban of the Cuban official web Reflejos, offended by the presence of an independent site like 14Ymedio should be celebrating: after a week of putting up with such dangerous neighbors, it withdrew the Yoani Sanchez’s daily from its platform. Authorities have demonstrated their inability to stand the test of freedom of the press.

Cubanet, Miriam Celaya, MIAMI, Florida, 27 March 2015 — The members of the Taliban of Reflejos, the Cuban government-sponsored website, offended by the presence of an independent site like 14Ymedio should be celebrating. After a week of putting up with such dangerous neighbors, the authorities gave censure the all clear, in virtue of which 14ymedio has been “suspended or mothballed” because, in this era of technology and communications, euphemisms are also updated — it will no longer be able to be viewed on a platform which describes itself as “inclusive”.

Thus, while 14ymedio, the digital newspaper, launched from Cuba and in which several independent journalists on the Island collaborate or are involved, has demonstrated its ability to make use of any possible opening that facilitates access to its pages by Cubans from within Cuba, the authorities have shown their inability to stand the test of freedom of the press and differing opinions, particularly when participants have the moral authority of having experienced, on a daily and firsthand basis, the realities they narrate, report, or comment on.

We must acknowledge, however, that the kids from “Reflejos” demonstrated, in addition to their “revolutionary intransigence” and their combative ability — taking into account that they are soldiers and spend their existence fighting symbolic battles — exemplary discipline to obediently follow the chain of command, which also brings to the surface their peculiar concept of autonomy and decision-power to manage their own website. And they still call themselves “free”.

Mercenaries at the service of the dictatorship?

Not necessarily. Or not all of them, for there are always useful idiots. It is known that the piñata of official patronage has its gradations, is limited, and extremely fickle. Today they take notice, tomorrow they won’t, as befits a system that has established its existence (not its success, as some claim) on the standardization of mediocrity. That’s the reason fidelity tends to substitute for talent in Cuba, and thinking is not only a heavy burden, but a dangerous pastime.

So let’s not be too hard on the little Talibans. Perhaps the hosts of “Reflections” are only members of a declining sect, worshipers of a regime that soon will leave them very disappointed.

For now, we can imagine the meetings that had to be stirred up at all levels and with “all factors” to analyze what measures would be taken against the counterrevolutionary intruders until the anointed “at the top” gave the censorship order… that is, the “suspension.” The truth is that those who control the dominion could not even decide for themselves, hence 14ymedio survived for a whole week on the official website. It is axiomatic that absence of freedom is so rooted in Cuba that the more loyal you are to the authorities, the harder the authorities enslave you.

But censorship is not only applied against 14ymedio, but also against freedom of access to the same privileged members of the sect who have the ability to establish a blog and a certain level of access to some websites that are tolerated by the government. Who knows if, at this point, some of the more novice and restless slaves, or the lesser bilious readers, might be wondering whether it would be more effective to destroy the internal counterrevolution by allowing Cubans to access our sites, to discover for themselves the lies that the vile “mercenaries” at the service of a foreign power – who inexplicably continue to exercise journalism — are trying to pull the wool over their eyes, most likely with the malicious intent of surrendering the country to imperialism; which is just, more or less, the work that the General-President is involved in with all his might.

Note: Miriam Celaya, a freelance Cuban journalist based in Havana, is visiting Miami.