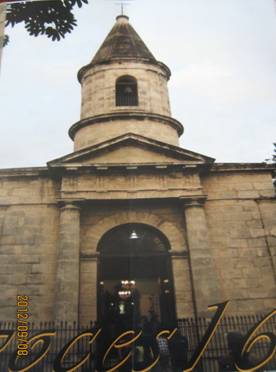 Since the arrests which grew out of a tragic event—the premature deaths of Oswaldo Payá and Harold Cepero—it has increased. Especially the stalking near the house of Antonio Rodiles, headquarters of State of SATS.* This time they were not content to hinder access to the residence. They also arrested people who, affirming their rights as citizens,insisted on being allowed to go there. After being prohibited by authorities from continuing on, two of the more impetuous young men decided to go along the shoreline. Rodiles’ house sits by the sea and only a big chain link fence, rusted by time, separates it from the ocean.

Some people were already inside, either because they arrived before the operation had begun, or because they passed unnoticed through the police cordon. They were suddenly startled by the sight of these two men—completely dressed but soaked—who climbed over the fence, trying to enter the premises. At first everyone thought the police operation was being carried out by sea, but they immediately recognized the two young men and let them in. The host loaned them some of his clothes so they could dry off, change and join the meeting.

With this and recent events very much on everyone’s mind, we were afraid we would be confronting a similar situation on Friday, September 7. We were to meet at the house of Yoani Sánchez for the release of the sixteenth issue of the digital magazine Voces, which is dedicated exclusively to the memory of Payá,who, along with Cepero, lost his life in a very controversial automobile accident.**

Many of us were mentally prepared for a “political stalking.” But when we arrived, everything nearby seemed normal. Even those “shady types,” the sight of whom has become routine for us, did not seem to be around. I am sure they were there, but were keeping a low profile.

When my husband and I arrived, there was already a group of people in the apartment. The living/dining room had been converted into a makeshift cinema. They were about to show a short film of the eulogy and internment of Payá, as well as images of masses said in his memory at the church in his neighborhood, where he was much loved and admired. Before the film began, Reinaldo Escobar read a brief but emotional message from the wife of the deceased, apologizing for not being able to attend.

Later, the journalist and blogger Orlando Luís Pardo Lardo, as is customary, presented the latest issue of Voces. Finally, some sample copies, courtesy of a collaboration among friends, were handed out to those in attendance.The children who were present provided a happy note that helped dispel the sense of nostalgia that was the prevailing mood of this gathering. Everything was very pleasant, but in an instant this cozy atmosphere was interrupted by an unexpected and unpleasant visit.

According to its website, State of SATS “hopes to create a plural space for participation and debate, where open and frank debate is exchanged. The project sponsors panel discussions, forums and other events that are filmed and broadcasted on the Internet.”

**On July 22, prominent Cuban pro-democracy leader Oswaldo Paya and activist Harold Cepero were killed in a car accident while on a trip to the east of Cuba. Many Cuban dissidents suspect foul play may have been involved. Paya’s daughter has declared in an audio clip that a second car provoked the crash.

Site manager’s note: Somehow this post never appeared, despite having been translated in September. Apologies for the delay.