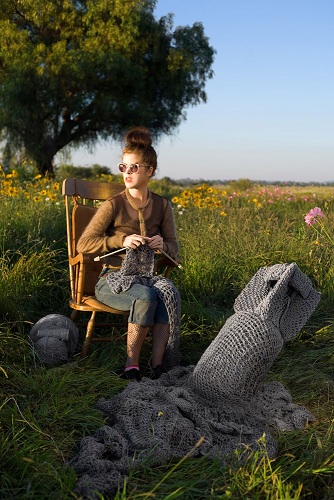 The dancer dances surrounded by cords. He is lonely. Amid ropes, some chairs also take up the insufficient space. In front of the man, the spectators watch. Mozart’s music sounds different inside the show. The dancer wears white; he moves, suffers each gesture he makes. Desperate he raises a woman’s hand in the auditorium and take her into stage. They dance.

The woman follows the steps a few moments but it’s not enough. The artist sits her in a chair. And in that way he acts with other audience members. They dance. Each companion becomes part of his pain and performance; though he goes on dancing alone. The music ends.

“I’m cold, cold, cold,” the interpreter exclaims. Now on the stage are many people but no one helps. The guests on stage doubt. What’s going on? Should they help the artist? Except for the ropes, nothing moves. They are the stage and the obstacles of the dance.

“They arrest an artist as in a fugitive criminal hunt.”

This perfomance has other aims: To emotionally disturb other creators, friends and their families? To tear to pieces the beauty of the world of art and communication?

Orlando Luis Pardo was recently detained in a cell for several hours. It’s not enough being a photographer to capture the talent of the Cuban blogger’s images. I look for the picture “A newspaper seller.” It takes the breath away of the most unwary. The seller could be from Haiti, Ethiopia or Somalia, but no; he is Cuban. Yes, from Cuba; that exemplar island in education, health, beaches. It’s a shame the photograph makes him doubt.

“Is he really Cuban, that man of the picture, black, clown or poor; or all at once?”

The image of that person wearing rags and newspaper disturbs each onlooker.

The ropes that surround the best Cuban bloggers, male or female — very soon any blogger — resemble those of the work “Spaceman Solo” by choreographer Narciso Medina. Ropes with their own names: Harassment, Suspicion, Humiliation. Caustic spiderwebs, omnipresent to cause an immense loneliness; to paralyze the artist regardless the occupation: photographer, writer, sportsman. It’s the same.

Those ropes want to silence — especially — the humans with inspiration, a stunning gift that Nature deals at random.

The signs show that there is so much nervousness in the government’s highest spheres. There is no money, no youth, no magic wand effective to show how Generation Y broke the dike. On the contrary, the Blogger Academy discovers the recipe to forge talents. It does not even have to get close to the potential “abductees”. A cloud of infectious blogger air. Infection that in the end expands as a virus or a bacteria: invading a living creature and multiplying in him. Immediately, the change.

The bloggers Orlando Pardo, Yoani Sánchez, Luis Felipe Rojas, Wilfredo Vallín and many other lucid people are a problem. Their work is in the net of nets. To top it off, with a boomerang effect behind the detractors. Talent, communication and technology. The end of loneliness.