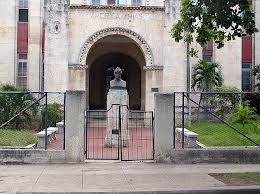 I got up a dawn to go to America Arias Hospital, more commonly known as Maternidad de Linea. I was there to accompany a friend who had gone to terminate a pregnancy. Just like everyone else, she had been given an appointment for 7:30 in the morning.

This beautiful Art Deco hospital, designed by the architects Govantes and Cabarroca with some Romanesque-inspired influences, still retains a few of its original light fixtures which denote the year of its construction, 1930. Notable also are the beautiful granite floors with their motifs of contrasting colors. The wonderful stained glassskylight, in danger of being lost, still bathes the walls with soft pastel light, while the allegorical sculpture depicting motherhood on the first floor stands in front the main entrance to the building.

In the large waiting room, whose entrance faces H Street, we found ourselves among a large group of patients and those accompanying them, who had been there since early in the morning. The murmur of voices was growing, filling up the space. Suddenly, a deafening noiselike the roar of an enginewas heard coming from the adjoining the room. This caused those present to raise their voices in order to be heard to the point that the noise became unbearable. Then, the scrawny woman in a custodian’s uniform, who was supposedly keeping order in the place, shouted, “Quiet in the room!”

I had to keep from laughing. I went up to her and quietly asked, “How is it you are asking people to be quiet when in the other room there is a noise that sounds like it is coming from an airplane?” She smiled and said, “They are doing some construction and what you are hearing is equipment removing the debris.”

I looked through the glass door to the other room and was astonished to see an artifact that looked like a small tractor sliding with great effort over those wonderful floors and almost grazing the central columns of the main entrance.

At that moment a young woman dressed in a denim mini-skirt, that covered her only just above the legs, and a short tank top, that left her ample midsection and an odd tattoo right above her tailbone exposed,made an appearance to ask the ultrasound patients for their referral papers. “An odd look for a hospital,” I thought.

Motivated by the delay and the wait, I decided to go the the hospital’s management to complain about the noise and rude treatment, and to offer some suggestions regarding the inappropriate attire of some of the hospital’s workers. Judging by the look on the face of the director’s secretary, my complaint was not well received. As a justification she told me they were doing as best as they could considering that there was reconstruction taking place so that they could continue providing services not only to their patients, but also to other hospitals in the area, which were experiencing similar problems. She told me to file a written complaint with my name, address and ID card number, to which I responded that she could count on it.

Finally, at 11 AM a nurse popped into the waiting room to inform everyone that she was sorry, but that the exams would be further delayed because there was only one anesthesiologist in the entire hospital, and at that moment he was in surgery. After an hour they began to let in the restless and nervous patients based on their order they had arrived.

The uniformed woman blocked the door so that those accompanying the patients could not enter the exam area. Then began the skirmish to offer small gifts such as packages of cigarettes and little “empanadas de enfrente” in hopes they would be the key to get through the barricaded door.

Armed with empanadas and other treats, I managed to get to the second floor, where the procedures are carried out, in order to lend moral support to the patient like the other friends and family members who were doing the same, offering moral support to our patient. There I observed that approximately a third of the beautiful facility was closed off with signs saying “closed due to danger of collapse.” It also pained me to see how the construction workers mistreated the floors, carelessly dropping their heavy tools.

Nervously, I watched the coming and going of the only wheelchair, that was missing the foot supports and the rubber rims on the wheels, being used to bring out the patients who were coming out of the anesthesia. Finally, the creaking rhythm of that chair revealed my friend, who, happily, was responding well and recovering quickly from that painful mishap. The complete of our beautiful architectural heritage, which we left behind and whose abuse I witnessed for many hours.