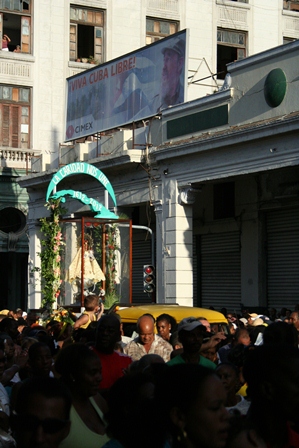 This morning I had invited some friends to watch the Mass at the Plaza on television, and afterwards to talk. The last call I got yesterday evening was from my friend Agustin, before the political police stopped him, was to tell me that he had talked with Felix, the pastor of the beautiful Baptist Church, and that he had let him know that the whole area were I live would be closed off to access, and we would see each other after the whole thing was over.

I don’t remember seeing such a display of control by the government. Nor seen it look as ugly as in these days when they march and shout in the same plaza where the government celebrations are held. Everything is closed, Boyeros Avenue is so quiet since yesterday evening. Then in the morning, from afar, some people passed by and I compared it with the days of their Revolutionary marches when, at dawn, that would gather around the Plaza. We mustn’t forget that the Pope will officiate the Mass in front of a few believers and a multitude of paramilitaries.

First we notices that Ismael Diego disappeared, he’d gone out to look for cigarettes and was detained as on another occasion. Afterwards we knew he’s gone looking for Agustin. Later Orlando Luis Pardo Lazo and his girlfriend, they were also detained at some station. None were able to call their family or friends, we still don’t know where they’ve taken anyone.

The dictatorship of “the good” has woken up to congratulations. Everything went well, the Pope behaved very well, he is not a dissident Pope. Somehow he’s awarded an ecclesiastical license to the regime to repress. They can’t even prove we wanted to go to the Plaza where this disastrous marriage was celebrated.

But the leitmotif had been announced with the Cardinal’s order to evict the protestors from the Cathedral, this will be the color of the Pope’s visit. We don’t matter, humans don’t matter, nor do Christians, what matters is the Doctrine, what matters are the negotiations that exclude these mundane sinners who want to be free and need Cuba to open itslef to the world and the world to open itself to Cuba. Agustin, my friend is a prisoner, Ismael Diego,Orlando Luis and his girlfriend, and so many others whom we will be finding out about because the cell phones were cut to block communication.