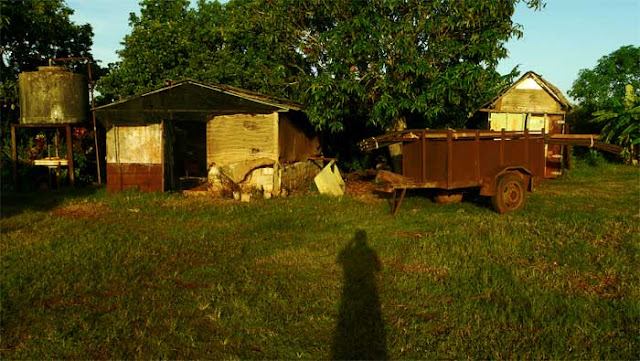 Practical woman that I am, I thought I would take advantage of my trip to Santa Clara to buy, along the highway, products which, in the capital, are hard to get or very expensive. From when I was little I remember the peasants by the road side selling what they themselves had planted and grown, trading their wares directly with travelers.

The lack of vendors on foot for miles and miles, surprised me, as I know these farmers have a very precarious economy, and I had to believe that the police dedicate themselves to punishing those who sell what they grow with their own hands. From their wooden houses, with their government-registered cows, they could earn enough from the sale of a few pounds of cheese to feed their families for some days.

There are still some, maybe fewer than twenty, along the miles that separate Havana and Santa Clara. Fearful, when a car stops they approach with caution, because the National Revolutionary Police hunts them by posing as customers.

The boy who finally sold me some cheese couldn’t have been more than 25. I asked him what happens when the police catch them: he said they run as fast as they can, trying to save at least some of the goods, while the police chase them back into the woods.

“They chase you into the woods?”

It’s hard to take seriously the ridiculous image of a uniformed officer knocking a peasant down into the grass to seize twenty bananas. As the poor boy hadn’t come to hear a lecture from me, I simply paid him and left, but the idea was making my head spin. Are there not, according to Raul Castro, a million unproductive people in Cuba earning salaries? Why don’t they start by getting rid of the jobs of these predators on the family economy and allow the farmers to sell their products wherever they want?