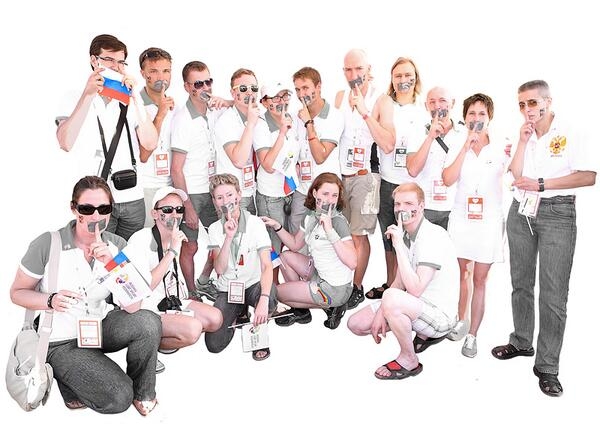 In this way, the Olympic team showed their support to the silent LGBT community in Russia. Neither after the Olympic Games in London nor after the World Athletics Championships in Moscow did any Russian athlete come out in support of the community.

The NOH8 (No Hate) Campaign is a silent photographic protest against the world’s anti-gay laws and propositions. The campaign is composed of photographs of people dressed in white t-shirts in front of a white background with their mouths taped shut and “NOH8” printed on one cheek. The campaign was created on 10 February 2009 by the famous photographer Adam Bouska and his partner Jeff Parshley as a direct response to California’s Proposition 8, which tried to eliminate the right to marriage of same-sex couples in the state.

Every day there are more demonstrations of support for the Russian LGBT community on the national and international level, even amid persecution and the continued violation of their human rights.

Since Vladimir Putin approved several anti-gay measures, the protests have extended throughout the world, especially leading up to the next Winter Olympic Games, which will be held in Sochi (Russia) in 2014.

Without travelling very far, the FELGTB (National Federation of Lesbians, Gays, Transsexuals, and Bisexuals) symbolically lit an Olympic torch this past Monday in Madrid with the aim of denouncing homophobic policies in Russia.

Some of the attendants—among whom were found the president of the FELGTB Boti García, representatives of the PSOE (Spanish Workers Socialist Party), such as Pedro Zerolo and Carla Antonelli, and the Equo, such as Juan López de Uralde—participated in a symbolic relay race that ended with the lighting of the multi-color ceremonial flame installed in Plaza Mayor. 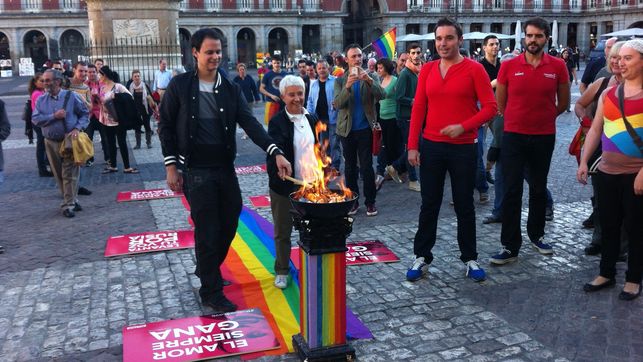 The basic aim, according to the manifest read by García and Rubén López, board member of the FELGTB international area and spokesperson for the Acrópoli University Association, was to show their “solidarity” with the Russian LGBT community and athletes that will participate in the Olympic Games in Sochi, who will see “their dignity reduced”.

Along these lines, they demanded that the Spanish Olympic Community and the Spanish Sports Council take a step forward to defend the rights of Spanish athletes, who “are surely not all heterosexuals”. They denounced the “inaction of the authorities”, who have succumbed to the “shame of keeping quiet”, López explained.

In recent months, Russia has approved laws such as those that prevent same-sex couples from adopting children, or the one known as the “law of homosexual propaganda”, which carries a marked homophobic tone according to LGBT associations. This law, such as they those from the Federation that they denounce, has led to a series of declarations in recent days on behalf of certain Russian politicians.

The manifest reports two in particular. First, the words of the Russian Sports Ministry, whom they accuse of ensuring that “during the Olympic Games, athletes may not show signs of affection with people of the same sex because they may be detained”. Second, those of the Vice Minister in charge of the Sochi Games, who ensures that “in compliance with this law, if people of traditional sexual orientation spread propaganda about non-traditional sex to children, they will be held responsible”.

The approval of these laws by part of the Duma, along with homophobic attacks that have come to light in recent months, has lead some associations to call for boycotting the Sochi Olympic Games, the first Winter Games to take place in the country.

It has also sparked demonstrations and protests in different countries, such as the celebrated one in front of the Russian Embassy in Spain last August, or in front of the Foreign Ministry coinciding with the G-20 summit.