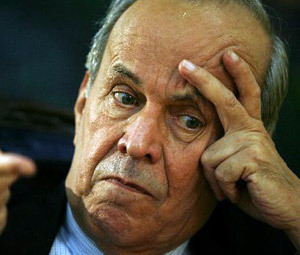 To Ricardo Alarcón de Quesada.
President of the National Assembly of People’s Power

You recently echoed a report by the CIA – sacrilege! – to assert that Cubans perceive a per capita annual income equivalent to $ 9,900.00 USD, which would place us just behind Brazil, the world’s sixth largest economy. This joke from “the Agency,” which frankly is not known for its sense of humor, is based on the supposed “freebies” guaranteed by our humanitarian government. I do really know how to say this, but you seemed to forget or ignore that throughout the working life of a Cuban worker state takes 30% of their “salary” every month, just to ensure their retirement and other Social Security guarantees.

You may think that all Cubans have the doors open to them that you have — in your duties as President of the Parliament — to say absurdities like this publicly, but fortunately or otherwise we do not.

Life would be so simple for the millions of us who can not afford to provide adequate food for our children; who are forced to hire private tutors to ensure their education, after one of Fidel Castro’s experiments destroyed, during the past decade, the functional infrastructure of the education system; that when we we take an old man to the doctor we have to pay to transport him — as the transportation system is a mess — more than we receive from our government for a month’s work; that we have no human way to build decent housing through lawful means; that when we walk into a State store that offers goods in hard currency, the State, which speaks of these “freebies,” retaliates with price-gouging that can not be compared with the rest of the planet.

Mr. President, if we are to talk about subsidies, let’s make the accounts clear: if I the State subsizes me every month through the ration book — which now offers enough to eat for only 10 days in the month — this means that it is subsidizing one-third of my basic needs.

Now, if I work for the State for a month, it pays me a “salary” that is smoke and mirrors; with great luck it will be enough to live on for one week. This means that I give the State a subsidy of three-quarters of my labor that I generate by my own hand.

I would like to shake hands, some day, with the generous Sheik of the United Arab Emirates, or the Saudi oil magnate, who give us millions each year to “freely” swell the State’s coffers; I hope I can, because without their contributions the state treasury with which the state “subsidizes” my life, would be filled only by the sweat of my people, period.

It is clear, therefore, that in this case nothing is free; but if on top of that the State claims the right to demand the highest share of our personal freedoms, then definitely, the books don’t balance.

But, according to you, it is all a matter of domestic mismanagement, and this would be why our wages are not enough to feed us, are not enough to guarantee our children a liter of milk, are only enough to allow us to eat with too great a frequency only rice with an egg, and todepend on the charity of friends and family to send shoes and clothes, without which they would walk half-barefoot and/or half naked.

It is because all that “annual per capita income” the Agency refers to is squandered, that our professionals, including physicians of all specialties, are obliged to exercise some other trade or to raise pigs, to leave the clinic or hospital to be able to support our family, and it is all because we are irresponsible, as $ 825.00 USD per capita per month should be enough to live comfortably.

Then, my dear sir, we Cubans make our own bad lives because we want to, and I, to cite just one example,was disqualified from the practice of medicine for being stupid, because my “salary” was enough to raise my children, because in my case, with a family of five, my share should be nearly $50,000 U.S. a year, according to your words and those of the CIA.

So I recognize that I was disqualified for stupidity, but I do have to note the detail that I never would have directed myself in such an “irreverent” way to Minister Balaguer at the end of 2005 to disrespectfully ask him to reflect on an “increase” of less than $ 2 to our monthly salary.

How stupid was I! With more than $4,000 U.S. in my pocket every month and I didn’t even realize it! Look at all the trouble my sad gonads put me through for such a banality. Looking at it this way I could not fail to apologize to Dr. Balaguer. Not surprisingly, he was offended and more aware than I, so he never answered me, and do you did not answer us either when we directed our case to you in March 2007.

In summary, Mr. Alarcón, it all boils down to a problem of bad arithmetic, that is, that if the 10 million Cubans who are not among the privileged can’t find a way to turn the measly $ 20.00 USD average the government pays us into the $ 825.00 USD per month that you “confirm,” citing the still execrable CIA, we don’t do it only because we are more gross and inept than the Brazilians. This mass of millions of idiots unable to undertake an operation so simple that even lunatics of the CIA can manage it, pass through hell because we prefer to keep for ourselves, every month, the $ 800.00 USD difference.

Mr. President of Parliament, do me one last favor: when you have nothing intelligent to say, at least it would be more useful to remain silent; if not for self-love — because you decided not to respect yourself — at least do it for Cubans like me who suffer a real embarrassment having someone like you heading up our Parliament.

Thanks to you, the world listening must think all Cubans are some kind of jerks, mentally capable of coming up with this nonsense. In any event, think twice before again citing the words of the CIA, lest the Party Central Committee ends up not liking the joke — because, no doubt, it has the power to that — and ends up deploying this evident vein of Creole fucker on some comedy program on TV.

Leaders like you are an embarrassment to the Cuban people. Personally, for years I have consider you a political corpse, because if you ever did anything that was a credit to my people, you definitely lost that day the world witnessed how the President of our legislature, stumbling all over the most ridiculous gibberish, did not know answer three questions from a lowly college student.*

*Translator’s note: Jeovany is referring to a Q&A session Alarcon held at the Computer Sciences University, where Eliecer Avila, a student at the university, asked a number of “uncomfortable” questions, such as why a toothbrush costs more than a week’s wages in Cuba, and why Cubans are not allowed to travel freely. Translating Cuba is working on a translation of the video made of this event (which soon went viral), and will post it here when it’s done.