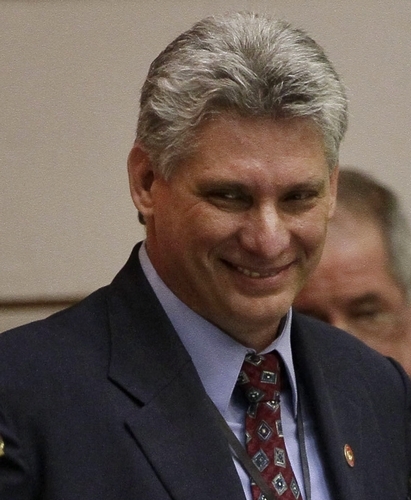 If for years Hugo Chavez was politically influenced by Cuba’s “historical” leadership (as those who participated in the Revolution call themselves), it seems that this influence is now reversed. That is, the attitudes of the Venezuelan president are taken into account by the authorities of the Cuban archipelago — who seem to take note of everything and imitate and adopt what suits them — to try to unlock the hinges welded shut by the rust of their political machine.

When Chavez came to Havana in December, and perhaps compelled by his speech to his people before leaving for here — leaving Nicolas Maduro (desperate for the job) to head the government — they coincidentally published a few days later in the newspaper Granma that the Cuban Foreign Minister Bruno Rodriguez had been promoted to the Politburo. Rodriguez is a young man who in 2009 replaced his predecessor, and who has exceeded so far all the required proofs of “Fidel-ity and Raul-ity” with the completion of the missions they have entrusted to him, and the insipidness of his flattering speeches.

A few days after the resignation of Benedict XVI, other “leaves” sprouted fortuitously from Cuba’s photocopier government. The resignations of Abelardo Colome Ibarra, minister of the interior, and Jose R. Machado Ventura, first vice president since an illness in the presidential chair resulted in Raul Castro giving up the vice presidential one to move up. Both these traditional higher-ups — and they weren’t the only ones — humbly, but without saintliness, put their portfolios at the disposition of the National Assembly.

The evidence the number one Cuban had been leaving around for a few years about who his “chosen one” would be, to wit Miguel Diaz-Canel Bermudez, bore fruit recently with the vote to make him Cuba’s first vice-president. With these impressions they have created a file with a renewed image of the totalitarian regime. Raul-ity and renewal seem to be the “R’s” that will begin to de-revolutionize everything that was change to drag the country down and freeze it in Caesarism.

With the perspective of Chavez’s deteriorating health and of money and investment from the United States, the real leaders in power are sending the message of change when the biological clock or the logistic and geopolitical conditions force it, not when it is demanded by society and the nation.

We need real reform in which the branches of government become independent, policy alternatives are recognized, other political parties are decriminalized, there are fundamental rights and freedoms, and genuine, transparent and democratic, elections that represent the different ideological colors of society.

I hope the historical leaders enjoy good health, so that Diaz-Canel — like his Venezuelan counterpart (as I said in a Tweet) — is not assigned the sad task of becoming a spokesperson for another leader, as if he didn’t have other things to do.

It seems that not only talent but a well-learned script, unconditional loyalty to the maximum leader of the only party (which also is the state), the ability to praise them and avoid the “honey of power” accusations from the elite, among other more minor attributes, are the merits of greater weight when appointing and promoting some to the country’s most important positions in despotic and dictatorial regimes.

Translator’s note: This post was published in Spanish before Chavez’s death.