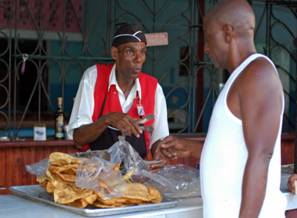 Although the United Nations stopped being a credible institution many years ago, at times it still issues announcements which can leave us astonished. This is what happened when a letter from the United Nations Director General for Food and Agriculture (FAO) was published yesterday in the state-run press. In it the Director General congratulates the former president of Cuba and all the Cuban people for having fulfilled the goal of reducing the number of malnourished people by half before the year 2015.

First of all, diplomatic protocol dictates that such a letter be addressed to the current president and not the former president — no matter what personal sympathies this important official might like to express — given that this is, supposedly, an official UN communiqué. Secondly and most importantly, where is the FAO getting its figures for such reports? Are they perhaps supplied by each government to the representative in that particular country?

It is hard to understand how someone can responsibly claim that a country with an inefficient agricultural sector — one incapable of producing the most basic staples for its population, or at retail prices affordable to most of its citizens — has reduced the number of malnourished people by half. Does this half perhaps refer to all the various types of civil servants and those who belong to the huge government bureaucracy? Is it average citizens who make up the other half?

We Cubans know all too well how serious malnutrition is. We must struggle day to day to find food; it is a juggling act just to survive. Has the FAO’s representative in Cuba ever looked into what the situation really is? Judging by appearances, it would seem that he moves in the highest circles of power — sometimes mistaking himself for one of its officials — if we take into account his public statements, which often appear in the  state-run press. Perhaps they stem from absent-mindedness on the part of the Director General, who resides in Rome.

We trust that statistics from the other participating countries have been gathered in a more serious way and are, therefore, more reliable. At least this would not lead to the macabre irony of telling someone who is malnourished that this is not the case because the FAO has officially declared it to be so. One final question: Of all the countries in the world, is it only the sixteen mentioned in the letter (Armenia, Azerbaijan, Chile, Cuba, Fiji, Georgia, Ghana, Guyana, Nicaragua, Peru, Samoa, São Tomé and Príncipe, Thailand, Uruguay, Venezuela and Vietnam) which have reduced malnutrition by half?