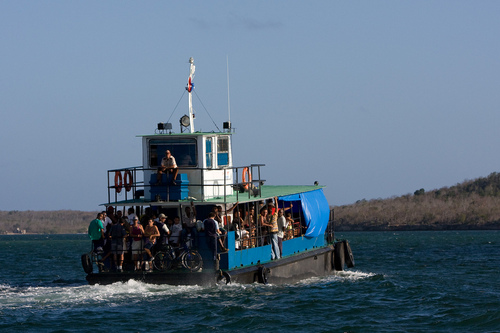 Bárbaro López Villavicencio, 44, and Rafael Felipe Martínez Irizar, 41, both from Cienfuegos and addicted to alcohol, decided, midway through 2009, to take over a boat to leave the country for Mexico, and from there, to go to the United States.

When making their plan they assigned themselves certain tasks. Martínez Irizar was responsible to find people with money who wanted to leave the country, as a way of helping to pay the expenses of the operation. Meanwhile, López Villacicencio was in charge of finding the fuel and the owner of a boat, who would be paid to fake a hijacking.

Pablo Gómez Castillo, a counterintelligence officer, reported the matter. They hadn’t even acquired a single liter of fuel at the time they were arrested. The court of Cienfuegos declared them guilty of the crime of leaving the country illegally.

None of the evidence provided to the court could give the exact dates on which the crime had supposedly been committed. The justice panel admitted documentary evidence about the place the plan was conceived, the research and attempts to buy petrol, between the last days of May and the beginning of June 2009.

The crime was considered proven exclusively by testimony of the witnesses and the accused, who confessed in court to having come up with a plan that they never put into practice. In vain they tried to have the case dismissed. The court did not accept this because “before their arrests they were making arrangements and inquiries related to the aims they were pursuing.”

The ‘dangerous plan’ “happily was prevented by the timely action of the authorities,” who, by arresting the accused, stopped the illegal activity from taking place. There was an acknowledgment in the court’s sentence, at the Division for Offenses against State Security in Cienfuegos, the body in charge of the ‘criminal investigation.’

It meant nothing that the prosecution accepted, in their provisional summary, that López Villavicencio ‘intended to speak about the mission’ to the witness Rafael Jiménez Solís, captain of the ferry and of the tugboat that the accused were planning to hijack, but “he did not carry it out.”

Neither did it help that “in the case the confessions were detailed and explicit, even to the extent of helping to clarify the supposed offense,” according to the court in its sentence. They believed, ingenuously, in the law. The Penal Code relieves of responsibility any person who voluntarily refrains from committing an offense, as long as they inform the authorities.

In its rush to deal with crime and injustice, the Provincial Court in Cienfuegos ignored the fact that all the attempts by the accused came to nothing. The sentence itself acknowledged that Martínez Irizar was unable to “achieve any practical result from his attempts to find fuel.”

An indication of the “efficiency, rational and individual treatment, appropriate communication with people, professionalism and speed in clearing up criminal acts and other services provided to the people” by the organs of justice and repression of the revolutionary government, as the newspaper Granma stated recently.

The court heard the statements of five people contacted by Martínez Irizar, as he sought to bring about the illegal exit. However, the sentence failed to clarify whether they had sufficient resources to finance the operation, which the plan of the accused required. Quite the opposite; the assumption was that they had all refused the offer, something quite unusual nowadays.

The evidence used to back the case was considered “consistent with the principles of science and reason.” Bárbaro was sentenced to 4 years in prison and Rafael to 5, the maximum sentence allowed for the offense of promoting and arranging the illegal departure of anyone from national territory.

If all Cubans who hatch plans to leave the country were punished the prison population on the island would be about 11 million. That truth doesn’t matter, and neither did the sentence reflect the fact that the offense was prevented and the accused repented of their acts. Far better to make an example of them. What matters most to revolutionary justice is applying the law “with the utmost rigor and all necessary severity.”