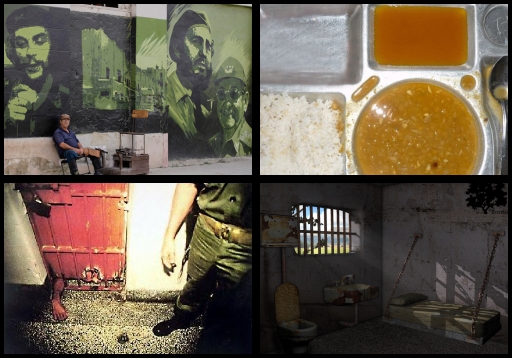 Along the central corridor of the prison, an inmate walks with his shoeshine box, to shine the shoes of the soldiers. They put their boots on the prisoner’s box, , as a gesture of arrogance, and he immediately starts to spread some dye and bitumen, provided by his family. The soldiers don’t pay him for his work, it’s not allowed to pay the prisoners. I ask the bootblack why he does it, what does he gain from it, and he looks at me seriously.

“For two reasons,” he answers me. “One, to get out of the barracks, to escape for a bit that foul space, of constant quarrels, intrigues and hunger.”

Seeing a guard approach, he shuts up, and continues talking when he leaves.

“The second is because, in consideration, they give me a little more than my share of food,” he says, shrugging his shoulders. “Political, you can’t survive here with the tiny amount of food.”

I pat his shoulder and leave.

When I pass through Barracks 6, an inmate is waiting for me pressed against the bars.

“I’m taking a stand, Political,” he tells me with teary eyes. “They won’t let me make a phone call to find out how ill my son is. I’ve talked with all the soldiers and they’ve rudely refused to let me. I’ve resolved to die of hunger.”

“What will you solve with that?” I say to him. “Your son need get out of here healthy, not dead: it’s the only way you have to help him.”

He nods his head, accepting.

“You only have months before being released, so be patient, bear up, this is the hardest part.”

His eyes are still damp and he thanks me. Later we part, each going to his own barracks to wait for justice to come.