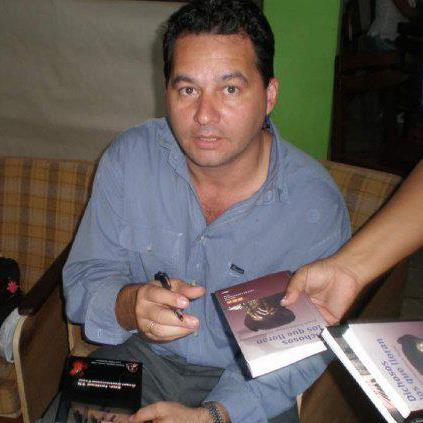 With the recent presentation in Europe of my novel “The Summer When God Was Sleeping”, which won the Internation Franz Kaka Prize for Novels from the Drawer, convened in the Czech Republic, and the resumé of awards which accompany me, you could think that I am a very lucky writer when it comes to awards, but this is very far from reality.

I want to share and I’m sure that I once wrote this in another post, that if you could publish in Cuba, it was thanks to the competitions, which function as a form of blackmail, once won, it shows their moral and ethical responsibility, which I assure you that they do not have, but they like to pretend to the public, especially internationally, that they themselves do have moral and ethical responsibility, because my books were and are rejected out of hand as soon as they are presented to publishing houses.

To me, they made it harder than anyone to get published. The editors and newsroom chiefs of these publishers, who maintain dialogues at book fairs as friends, confessed to me the impossibility of publishing them, precisely because of the topics addressed; if they did so they would be relieved of their jobs. Therefore, at different times, I was rejected from several news features, which were intended to show the different ways to approach the narrative by writers of my generation.

My art was always accompanied by the themes of social deprivation and lack of political freedoms, so I was constantly an unprintable writer. I learned that winning the awards was the only possibility for me to address my failure to publish. Therefore in 1992, after I had been awarded the Casa de las Américas Prize, it was withdrawn thanks to the interference of State Security before the jury which retracted its vote, convinced that my human and slightly epic vision of the war of Cubans in Africa would create great political damage and it did not seem eloquent nor productive to present an image of those suffering soldiers that I outlined in my stories.

After changing the title of the book, in an attempt to mislead the State security agents, who were like dogs sniffing the trail of my creations, I sent it to a contest of the Union of Writers and Artists of Cuba (UNEAC), and it was honored in 1995; but that wasn’t enough to get it published and for three years it would remain on the desk of the then President of UNEAC, Abel Prieto. After a dark negotiation, it was published in 1998, after I agreed to remove five stories from the final copy. They published a poor and ugly edition on purpose, which more closely resembled a box of detergent than a book and this was done with the purpose of weakening the book’s distribution.

In 2001, after internal pressure from the organizers of the Cuban Book Institute, whose president was the Taliban Iroel Sánchez, it was decided in the office of Iroel Sánchez himself, with a vote of 2 to 1, with the previous winner of the award, the writer Jorge Luis Arzola, communicating via telephone and by giving his vote to my collection of short stories, my book “The Children Nobody Wanted” saw the light of day.

Immediately, the War Combatants Association of Cuba (veterans), sent a letter to the Ministry of Culture and the Book Institute itself, for the critical vision of my literature, cataloged the poor management before the Revolution and condemned the actions of those leaders of the culture that allowed it. Iroel Sanchez himself, who was taunted for having participated in the Angolan war, confessed to me that his fellow soldiers criticized him for having allowed, despite it being against their will, the book’s publication.

Later, in 2006, also under pressure, when the doctor Laidi Fernández was part of the jury, and at the end she gave her vote, when she realized that there was no point in voting against, it would be 3-2, and that her father, the poet Roberto Fernández Retamar, president of Casa de las Americas, made the comment to Roberto Zurbano, then Director of the Editorial, “my book would remove the foundations of the institution,” the jury awarded me the prize, and the book, despite being published and presented in a small percent of the copies which they delayed for two years, in another attempt to postpone the promotion of the book.

Anyway, I regret nothing, something made me guess that it was the right thing, so much censorship against me was the announcement of a literature which was non-conformist and contained an unfriendly vision of officials. These are the fortunes of my “prize-winning” books, and so much anguish has accompanied them, to the same extent that they caused distress to the political and cultural leaders.

For many years, more than ten books have slept in my drawer. Sometimes they look through the crack and sigh, waiting for better times, that the darkness would dissipate and the light and the wind would come in and stir the box like signs of progress, as it did recently with a ray of light with the Franz Kafka Prize.

One already escaped, and those that remain in the drawer await the literary raft which will take them across the raging sea of censorship imposed by the dictatorship, to reach the land of the reader and be published in their own right, and not to be silent but to be waving little flags and smiling at leaders and self-censors. At that price I prefer the “unpublished.”