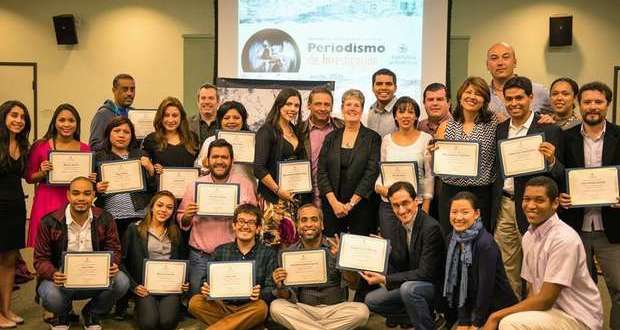 In early October, when I was invited to a workshop on investigative journalism at a university in San Diego, the first thing I did was search the internet for background information on those courses.

I knew that the speakers were superior.  It’s not every day that an independent Cuban journalist has the opportunity to dialogue with reporters from the US of high caliber, some of them Pulitzer Prize winners.

I confess that I had an attack of skepticism when I saw the schedule for the workshop.  The presentations dealt with the border conflict between Mexico and the United States, new technological tools for investigative journalism, and how to approach reporting on health and the environment in a creative and entertaining way.How would I be able to combine those themes with the reality of my country, which for 56 years has been ruled by autocrats named Castro?  I was mindful also of the existence of a law which allows the sanctioning of an independent reporter with 20 years of incarceration, and that the internet is an expensive luxury.  In a country in which the average salary is 20 dollars a month, one hour of internet connection costs 5 dollars

With those doubts in place I enrolled in the workshop. Twenty-two colleagues from Colombia, Venezuela, Mexico, Guatemala, Panama, Costa Rica and Cuba, all living in different contexts. Perhaps for the Venezuelans the realities are analogous. It was an honor to be the first Cuban to be invited by the Institute of the Americas at the University of California, San Diego.

I am one of those who believe that journalism is an occupation always open to new experiences. The workshop was designed in a meticulous manner. Denisse Fernandez, the assistant, was on top of every detail. From the accommodations to the transportation, even providing dinner at the hotel, foreseeing that my arrival in San Diego would be around midnight on a Sunday.

From the first presentation by reporter Andrew Becker, the workshop awoke my enthusiasm. To learn of the raw realities of the border of Tijuana, the emigration problems and drug trafficking seen from a new perspective was an impactful lesson.

I intend to adapt the tools I learned and the experiences narrated to the Cuban context. Although the cloister of the workshop presenters was not typical of academics seduced by Fidel Castro’s revolution, the state of affairs on the island obviously did not preoccupy them.

I had to repeatedly explain to them our reality. And why certain standards and tools of modern journalism are anachronisms in Cuba, where there is no requirement for an institution to disclose information or statistics.

Yes, certain web applications for use in investigative journalism were novel. But if I do not have internet access in my home, nor is there public access to the internet, not to mention that many websites are blocked, how can one use these tools?

“Can you imagine, ” I said to Lynne Walker, one of the most extraordinary journalists I have ever known, “If I were to ask my boss at Diary of the Americas for $2000 to cover a story, when they operate under a minimal budget?

“If I took eight weeks to report a story I would simply die of hunger. The independent journalism that is done in Cuba, in web pages that receive funding from foreign institutions or newspapers with scarce financial means would not allow that.

“They operate like meat grinders. You must constantly be submitting articles, and because there is no profitable business model, digital journalism becomes an establishment of survivors.”

Lynne listened to my arguments with patience. Smiling she replied, “Then we submit to defeat. Will we be stopped by the fear of being murdered by a drug cartel in Tijuana, of being unemployed in Caracas, of being poorly paid or having no internet access in Cuba? It’s all about being creative. Overcoming barriers.  And always think big. Never accept a No. Those are the basic rules.”

Besides gaining new knowledge and learning new journalism techniques, the best part were the ties of friendship made with Latin American colleagues.  Because of the slightly egocentric mentality of many Cubans, we tend to believe that our political and social problems are the most severe in the world.

But you must modify your way of thinking when you meet reporters of interior Mexico who for months have had to operate with police escort because of narcotrafficking, or men like Columbian Fabio Posada who was chief of an investigative unit of the newspaper El Espectador, or John Jairo, who frequently receives death threats since reporting a story in Cucuta.

With the six Venezuelan reporters attending the workshop I shared an almost natural chemistry. They are now living through what we experienced in Cuba 56 years ago. The compadres of the PUSV (United Socialist Party of Venezuela) intend to dismantle piece by piece democratic institutions and freedom of expression.

Certainly, Cuba continues to be substandard in the exercise of freedom of the press. But the rest of Latin America is not doing much better.

Photo: The participants of the Investigative Journalism Workshop (November 10-14, 2014) display certificates earned on the last day. Taken from the blog Journalism of the Americas.