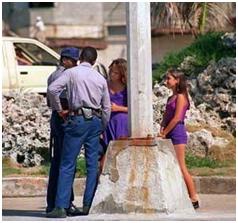 In December 2009, Cuban State Security detained without charges the USAID subcontractor Alan Gross, for bringing satellite connection equipment to the island. At the end of March 2010, the Department of Technical Investigations (DTI) which serves the “section of evils” (prostitution), arrested an Italian man addicted to sex with young girls, according to the record No 92 of the People’s Popular Court of Las Tunas, from February 25 of this year.

The two foreigners faced different outcomes. The American was sentenced to 15 years in prison for actions against the independence and territorial integrity of the island. The Italian was simply expelled, despite having, since 2005, sought sex with minors.

In June 2010, the United States reaffirmed Cuban as a country where there is human trafficking. The American government, since 2003, has included Cuba on the blacklist for “not complying with the minimum measures to eliminate human trafficking and not making significant efforts in this area,” according to its report.

According to one of those implicated in the case, who preferred anonymity, the Italian was expelled. After the prosecutor and an attorney took his declaration that was used in the trial against the 7 from Las Tunas accused of pimping. According to the court of justice, before leaving the island he confessed that one of those implicated had been involved with “more than thirty young people with whom he had sexual relations and that he paid them between fifty and one hundred convertible pesos.

The court stated that the foreigner also gave the girls presents, bought them clothes, and once he had returned to his country he sent them money. According to the record, the foreigner visited the houses or knew the families of most of them.

The court did not specify the exact date on which the events occurred, despite that fact that Cuban authorities through the Department of Immigration and Foreigners, maintains strict control over the entry into and departure from the country of both Cubans and foreigners.

An official from the Department of Technical Investigations , a reference witness at the trial, “testified that he was aware of the first information about the arrival of the foreigner in Las Tunas province, until he began to be of operative interest.”

The island is “principally a source of children subject to trafficking in persons, above all to exploit them commercially within the country.” The United States is concerned because prostitution continues being legal for minors age 16 and 17. The criminal legislation only applies special protection to minors age 14 and under, against pimping and human trafficking.

In August 2006 the Committee for the Elimination of Discrimination Against Women recommended the Cuban State modify “the legislation relative to the age for contracting a marriage with a view to eliminating the exceptions that allow 14-year-old girls and 16-year-old boys to marry.” The Convention on the Rights of the Child understands a child to be any human being under 18.

For Revolutionary Justice, high tech equipment that improves access to information within the island is more dangerous than unscrupulous tourists who come to the country looking for underage children and cheap sex. Is it more important to protect political interests than the adequate development of children and youth? There’s no doubt, we know which way the balance leans.