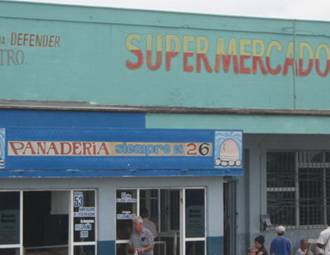 The other afternoon at home, talking with a friend, she was telling me, dying with laughter, that when she went to Central Park, a well-dressed man holding a little boy by the hand came almost alongside her. With us, she told me, a policeman was walking along, and when the little boy saw him, he said, “Policeman, are you my friend?“

The father reacted angrily and loudly told the little boy, “I’ve already told you a thousand times that the police are not your friends.”

My friend said she heard him clearly, so the policeman must have as well, but he continued walking without taking any notice. Then the young father approached her and said, “Excuse me ma’am, but it’s at the nursery school and on the TV that they teach these things, and I’m tired of explaining it to him. Imagine, I manage a bakery, and every now and then I end up scapegoat for the nonsense of my employees, because a baker doesn’t earn 200 Cuban pesos* a month.

“I tell them, they have to accomplish the work, produce the amount of bread required by the plan, and that’s what concerns us. The other day, one of my employees left with a bag with about five pounds of flour, to resolve [that is, to sell on the black market], and a police officer saw him and took him to the station, despite my going out to defend him.

“So I went there to try to get him out. They ignored me but after insisting for a little while, the desk agent took me aside and whispered in my ear. ’If you give me five cuquitos* (CUCs), you can take him now.’ So that’s how I got him out.

My friend told him, “Don’t worry, I know what it’s like, my friend has a car from the ’50s and took out a license as a taxi. I wish you could see how the police stop him for anything, and they always hit him up for some money or a snack. Now my husband knows and always goes out prepared. He said the other day he saw how one of them take a swig of rum that another taxi driver offered him, and this is the police on duty on a motorcycle!”