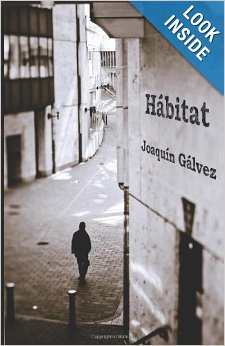 I’m fed up with poetry that doesn’t speak, that doesn’t shake you up, that doesn’t give you that punch in the face that we expect from every book. In the end this is the literature of a kind of sado-masochism to which we’ve been accustomed. However, Joaquín Gálvez showed up on December 6 at the regular group at Cafe Demetrio in Coral Gables, with a handful of poems which are a benediction.

I’m talking about the verses woven on Gálvez’s personal blog in his Hábitad (Neo Club Press, 2013) right now. This book is written as though fleeing from the finish line and the applause and it seems to me to be one of the primary resources. “Thief and police: they imprison you, punish you, kill you… / and in the end/ you show them that playing is the only triumph.” The passages flowing with the poetic impulses in Gálvez’s work, cleanse and light the way for those we left behind: perhaps readers.

I imagine that Hábitad undertakes the difficult course of the empty shelves, the book facing the child with his nose pressed to the glass, but it is fortunate that the time is now. Poetry is a very strong antidote for sentimental and lost souls, those who imagine that cannot live without poetry.

Joaquín Gálvez has thrown himself into the vacuum with this new book, has screamed obscenities in the midst of the concert and that is laudable. To write: “I had enemies because of the light with which I could do good,” is an act of magic in poetry itself. This tightrope of words plays with everything to weave the meaning of his life, of our lives, and is bringing light to everyone, facing the gate where we go to throw stones like on condemned to death. For this he has written his Hábitad.