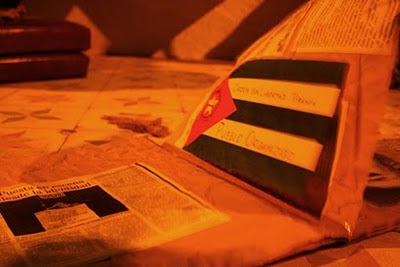 A MAGAZINE OF CEMENT PAPER

A free magazine can be invented over the dusty cartridge of an empty cement sack, opened.

In fact, freedom can be just that: a recycled powder, a remnant, with the rhetoric of its aired texts, without more design than that of a pragmatic parchment.

And the gates of the fringe theater group EL CIERVO ENCANTADO (5th and D, Vedado) served as coliseum for this somewhat eccentric experience: to cut up a cement sack and construct a personal magazine, live (Made in Omar Pérez + Yornel) by means of collage, cut-up, and cut & paste (preschool techniques borrowed by intellectuality).

This past July’s Saturday the 31st, the late night of El Vedado had in that corner a breather from the police oppression that smolders our avenues, on the hunt for an identification card or an island beating (under the digital cameras hanging from lampposts, perhaps by their necks).

“P350”: that’s the name of the Cuban Portland cement and it’s also a magazine that already accumulates a few collection bags.

Concrete creativity. In a special space where the prize-winning filmmaker Enrique Pineda Barnet fits right along with the censured performer Luis Eligio Pérez (from OMNI ZONA FRANCA). Even I.

The fossilized functionaries of the Ministry of Culture never peek their naphtha noses around there. They’re afraid of the democratic nobility and the enchantment of a theatrical stag. It’s just that they have quinquennials of experience closing down editorial projects, from El Puente, to Pensamiento Crítico, even Albur y Diáspora(s). It’s time that they retire or resign from some of their subcommitments of second-fiddle censor.

But P350 will be hard to fetter. The artists Omar Pérez and Yornel simply do not distribute it. They make it and then they exhibit it, carrying their cartons from home to home, like construction snails. Besides, they don’t even do it themselves, but they invite any creator to get in there and get their hands dirty so they can become smeared in the liberty of authorship. Do it yourself…!

P350 is a magazine that, as it gets stronger, like the original cement of its buttress, I’m sure will stick on the throats of more than one Cubanesque hooligan of guayabera and bureau.