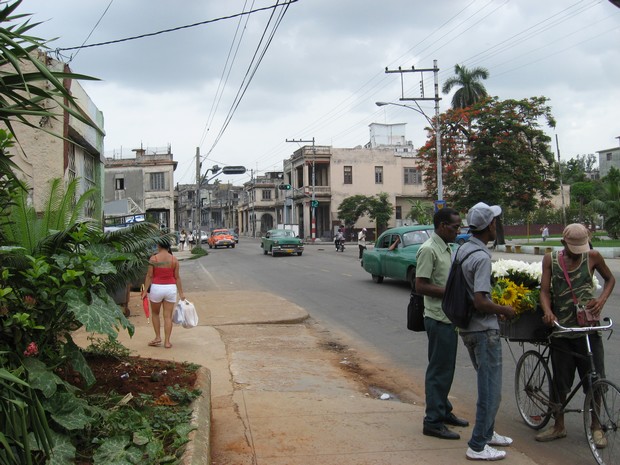 On the night of March 17th, 2003, my mind was somewhere else. I did not have a single cent in my pocket and I had to buy vitamin enriched milk formula (which at the time cost 4 dollars) for my daughter Melany, who was only a mere one and a half months old. The excessive appetite of the baby had compelled the pediatrician to suggest the vitamin enriched milk along with the mother’s breast.

At the time, I was an independent journalist for the Cuba Press agency which was run by the poet and journalist Raul Rivero. I wrote for the website of the Interamerican Press Association and for Encuentro on the Net, a site created by Cuban exiles in Spain.

But the pay for writing articles would arrive every two or three months. And on March 17th, the day before the government would unleash an oppressive wave against 75 dissidents and independent journalists, I was trying to make ends meet. I spoke to my wife about the possibility of selling a watch of mine and some of my clothes in order to have enough money to buy the food for my girl.

That night, I stayed over at my daughter’s house, so that I could help her mother, who was exhausted by the customs of little Melany who would frequently wake up in the middle of the night and stay awake until dawn.

At midnight on Tuesday 18th March, I returned to my home in the neighborhood of the La Vibora, where I lived with my mother, my sister and a niece. With a weariness of the ages and eye bags to the ground.

On the balcony I saw my mother, Tania Quintero, also an independent journalist, making incomprehensible signals. When I arrived, she told me that several journalists and dissidents had been arrested.

The sleepiness I had was suddenly taken from me. The bad news did not stop there. Mass detentions were taking place throughout the island. The next day we found out that almost a hundred people had been arrested and their homes meticulously searched.

My mother and I were expecting our detention at any time. We went about with a toothbrush and a spoon. I talked with my wife and I told her grimly that at any moment they might come for us.

Our hearts were in our mouths. Those were days full of fear. I did not understand the reasons for the government to jail a group of people who opposed them using peaceful means or who wrote without restriction.

Journalist colleagues like Raúl Rivero, Ricardo González, Jorge Olivera and Pablo Pacheco, by state decree, slept in the windowless cells of the political police. We listened to shortwave radio and the denunciation from the rest of the world was dramatic. Castro, in his calculated strategy, believed that the war in Iraq would divert attention from the issue. Not so.

As the days passed, a powerful burst of attacks was unleashed on the opposition in the official media. And the circus began. Unfair trials and a series of moles that had infiltrated the dissidents and independent journalists came to light. With horror I remember that there were seven requests by the procecution for the death sentence.

As “strong evidence” the prosecution presented typewriters, radios, books, blank sheets of paper … Not one single firearm or explosive material was produced. “Castro has gone mad”, I thought. One thing was certain: the blow to the opposition had been prepared meticulously.

The Varela Project, by Oswaldo Payá Sardiñas, had Fidel Castro up by the balls. Any Democrat that passed through Havana asked the Comandante only that he comply with the laws of his own Constitution, which authorized the implementation of law reforms when 10,000 signatures were collected.

And that was what Payá’s movement had done, collecting more than 10 thousand signatures. Even the ex-president of the U.S., Jimmy Carter, in a speech in the auditorium of the University of Havana and before Castro himself, said that he was required to meet the constitutional requirements.

This ended up aggravating Castro, who since 1998 had a network of 12 spies dismantled in the U.S. with 5 imprisoned. No legal maneuvering had made the remission of the penalty possible so he decided to play hard.

He made reforms to the Constitution to perpetuate his political system. And launched the sinister Law 88, known as “gag rule”, which could send you to prison for more than 20 years, just for saying, writing or disagreeing, under the accusation of serving a foreign power.

The conditions were created to unleash a crackdown on the opposition. The Iraq war was a smokescreen that Castro decided to use to evaporate the news.

No opponent or journalist was sure of their situation in the following months. My mother, my sister and my niece went into exile. I preferred to see my daughter grow up. Watching her take her first steps and say her first words in the country where she was born and where her parents and grandparents were born. Nobody was going to stop me. Even at the risk of going to prison.

Eight years after that fateful spring, Fidel Castro, somewhat recovered, continues to write a litany of thoughts about events on the planet. Now aware of the uprisings in several Arab countries.

His brother Raúl has not made big changes and continued the same policy of repression against opponents. Those still discrediting and rejecting. Of the 75 prosecuted in 2003, two remain in prison.

In the air of the Republic, the intimidating Law 88 remains afloat. The prisons can be re-filled at any time. With nationals or foreigners, such as the American Alan Gross, who was condemned to 15 years in prison.

At this stage, the Castros are determined to remain in power until death comes to them.