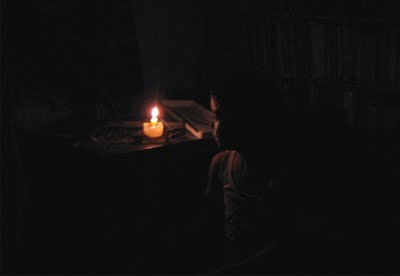 Francis Sanchez, 18 April 2011 — I had promised to publish two other parts of my last post, “Closed for Demolition”. Many days have gone by without my being able to do so. I will no longer do it, because definitely what I had in mind would only add essay-type content. The fundamental thing, the denunciation, is already done, and what remains is the testimony. I will save those texts in order to add other pages to new projects.

I am very grateful to all those who have written comments and who have offered me solidarity because, although it may seem minimal, it is an indispensable nourishment for moving ahead with life. In some way, although at times there is a delay in my being able to know it, I have always ended up becoming aware of what they comment and write to me. But it is true that I could not publish with the necessary frequency, or safety, without harming other people who were helping me. Thank you.

The blog “Man in the Clouds” is a marvelous chapter of my life that I do not regret. Of course, neither am I the one who is closing it–“for now”, I hear the little voice of temptation tell me–I specifically denounce my fear–not so much for me, but for my family–and the things that cause it, because no one is to blame for feeling fear. “No one. Absolutely no one,” says the magnificent writer Eliseo Alberto in the memoir “Report Against Myself.”

What will be most difficult in closing or cutting off is the need for complete freedom of expression, an inalienable right that connects hears and does not depend on any cable. So we will keep on seeing each other in this beautiful site.

The television series “The Reasons of Cuba”, which launched a new catalogue of agents infiltrated into Cuban society, with the direction the revelations took, places in evidence a new period of control or official pressure on national culture and intellectuality, as if the margin of natural life we had left for our development were not already very miserable. The supposed master act of these “agents” did not happen before or after it came out on television, but only now that they have come to achieve something with true impact, and it is this: the mixture of anger, disappointment, nausea, fear, shame, pity, remorse, etc. that can be found by following the tracks that they left among all the manipulated people–colleagues, friends, neighbors, work mates, etc.–whom they tried to provoke and attract with false projects that they made up themselves. Revulsion is said to be a paralyzing feeling. Now, when the coaxial cable that has arrived at the Cuban coast is about to begin to function, and at all levels they are trying to limit access to the new technologies, flagrantly violating the privacy of the mail, which is a violation of the Cuban Constitution, perhaps the punishing blow is taking shape, the censorship that we intellectuals have been waiting for since the “email crisis” of 2007. To criminalize intellectuality and that natural attachment to freedom of expression.