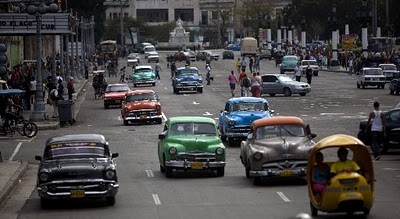 Ever since the time, now remote, when dollarization was introduced in the Cuban economy the freebies have been fading away, along with the subsidies and other gifts from the public treasury that our government makes in their inordinate desire — as a poet from the romantic era said — to anticipate the future.

“The invisible currency has disappeared,” we said, surprised and shocked to realize that we could no longer buy refrigerators, washing machines and TVs through merit obtained in our workplaces and that, from then on, it would only be possible to buy those home appliance paying with a currency which, until recently, was known as “the money of the enemy.”

Then came the CUC — the Cuban Convertible Peso — which made the substitution lose some of its obvious symbolic value. The bottom line, however, was not the color of the bills but that, since that catastrophe, it was no longer necessary, in order to acquire useful things, to do voluntary work, attend assemblies, or to participate in a harvest, a microbrigade, or an international mission. Quite the opposite: options include diverting resources, doing things under the table, engaging in some business and in extreme cases selling what one possesses simply because one has a body.

Right now another base (will it be the last?) of the corrosive custom of taming loyalties with privileges is collapsing. The “letters” are over!

Indeed, because when a few years ago the government had “the audacity” to allow Cubans to legally participate in the purchase and sale of private cars, it remained clear that those on display in the agencies, be they new or used, would be sold only to those who could prove that their convertible pesos had been earned in some officially blessed way on some honorable mission backed by the state. Remittances sent from abroad or earnings from a private restaurant or renting rooms to tourists didn’t qualify.

It was then that “the letters” appeared, which at first could only be signed by Carlos Lage — then vice president of the Council of State — and which later were issued by the Ministry of Transport, where the ability of money to be converted into cars rested on a signature.

I’ve been told that there were some seven thousand authorizations to acquire cars that their holders hadn’t yet been able to use, when the order came down from the highest authorities to end this procedure.

Everyone knew that many of the cars bought through this means, at subsidized prices, were immediately resold at market prices, that which a capricious — but not blind — invisible hand, allocated to each commodity; and that the state will now consider it fair to freely sell the vehicles they have in their warehouses.

Those who had the cunning idea of buying the letters before they had been turned into cars have lost their money; those who earned the right to a letter through their diligent work or through flattering their bosses, have lost their illusions. Of what value to them is their noble sacrifice or cowardly silence, their loyal obedience, their abject betrayal?

The next deepening of the Raul reforms could be directed at the buying and selling of home. We are already seeing real estate businesses selling houses and apartments at a competitive or abusive price. But let us have no illusions: those who are waiting in line to receive handouts will not rise up. The old dilemma between applause and desertion will always remain.