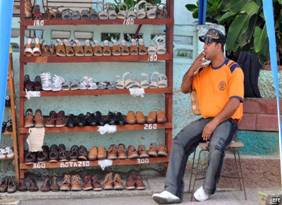 Self-employment, in the face of capricious decisions by the authorities in charge, continues to lurch along, and its progress and solidification as a lawful way of life for thousands of people becomes more complicated by the day. Although it has been officially declared that the policy continues the same as when it was first authorized, and the only thing intended by the new regulations is to set up greater order, in practice it is not so.

Apart from the widespread confusion between what is authorized and what is unauthorized, caused primarily by the generic, ambiguous, extremist, and bureaucratic regulations of the Ministry of Labor and Social Security, the Ministry of Finance and Prices, the Councils of Administration of the People’s Power, and others involved, plus the arbitrariness of inspectors and others in control, requiring compliance with nonexistent provisions, and imposing excessive fines according to their personal interpretations, the chaos created makes the practice of self-employment a living hell.

Day by day, because of all this institutional disorganization, it survives by the tenacity of those who practice it, risking resources and efforts on activities that not even its proponents have been able to define within serious legal boundaries, leaving everything to future studies, adjustments, and details, as the authorities are wont to respond to those who ask, demonstrating their professional precariousness for holding the positions they occupy. While the unconditionally incompetent constitute a majority in the different levels of state administration, the solutions shine by their absence, the rope continues to tighten to the breaking point, with the implications that entails, and the problems pile up.

It seems that self-employment, which emerged as a necessity to resolve the employment that the state is unable to assure to its citizens, continues to terrorize those who were forced to authorize it, those who, without the help of their many advisors, find ways to control it without completely strangling it and, what concerns them more, without losing any of the perks of power accumulated over so many years. But it turns out that the citizens of today do not look anything like those of yesterday: they are now tired of fables and impositions and are willing to defend their rights of survival.